Concern over protesters at potential site 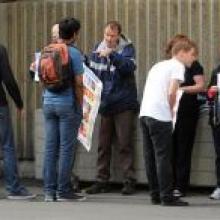 Sam Sharpe (left) protests about protesters outside the Dunedin hospital yesterday. Photo by Stephen Jaquiery.
Southland women seeking an abortion in Invercargill may have to avoid protesters if a planned relocation goes ahead.

The Southern District Health Board confirmed it was looking at moving the service from its current site to the existing community services building.

Mr Ng said the board was looking at reconfiguring space in the community services building to include a multipurpose area where "a range of women's health procedures can be performed."

He said if the relocation went ahead, access to the service would be from board grounds away from the main thoroughfare.

National president of the Abortion Law Reform Association of New Zealand Terry Bellamak said protests were confronting and stressful for those using termination of pregnancy services.

"They're going for a medical procedure; they're already feeling somewhat vulnerable ... This is something people shouldn't have to put up with.

"I can see the problem. It seems this is a really bad idea, because people can congregate on Elles Rd."

The reader, who did not want to be named, was also concerned the relocation of the service would be problematic because of asbestos present in the building.

In response to whether this was an issue for the health board Mr Ng said it was managing it across the whole of the SDHB.

"Building projects such as this one specifically review and manage asbestos risks so that there is no risk to patients and staff."

The health board did not comment on the cost of the potential relocation.