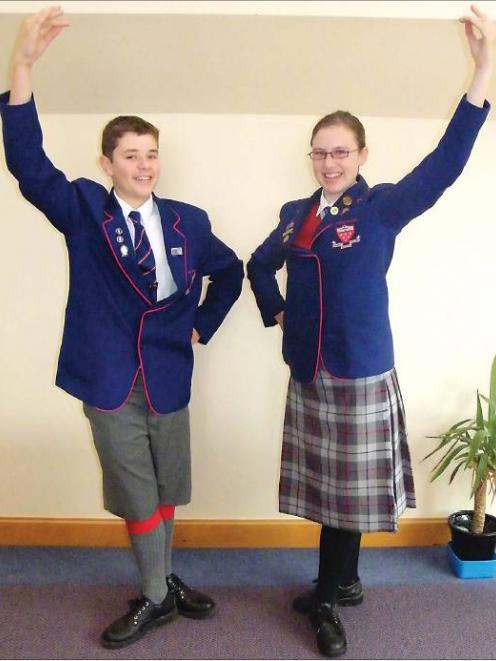 Highland style: Siblings Leighton (15) and Nadine Terry (17), of Gore, show the flair and style that is proving successful for them both in Highland dancing.
Sibling rivalry is alive and well in the Terry household in Gore, with older sister Nadine (17) leading the race through the ranks of Highland dancing and younger brother Leighton (15) following behind.


Both just completed their respective New Zealand Academy of Highland and National Dancing grading examinations in Dunedin during the school holidays, with outstanding success.

Nadine passed her advanced examination with honours in practical and theory.

‘‘I got 95 per cent in the theory exam, which is about an hour long.

‘‘The whole exam takes two hours to complete and includes practical elements in bar work [exercises] and five different dances - the Highland Fling, the Sword Dance, the Sean Truibhas, the Highland Reel and the Reel O'Tulloch.''

As an advanced dancer, she was now able to get involved in judging and teaching Highland dancing.

‘‘The most exciting thing is I have been nominated to go to the Tattoo in Edinburgh in 2010, so that would be amazing.''

Leighton and Nadine are now taught by a teacher in Mosgiel, near Dunedin, so lessons involve a long trip there and back.

Nadine said her immediate goals were to do well and win the national under-18 championships in Palmerston North at Labour weekend.

‘‘I'm currently ranked seventh at under-18 level, so I want to improve on that,'' she said.

Younger brother Leighton said he used to get dragged along with his sister on competition days for Highland dancing.

‘‘I just got bored at sitting around and watching it, so I decided to give it a go.

‘‘I started when I was eight, so I'm a late beginner [Nadine started dancing at age four], and I've just passed my elementary examination, which is the third highest - [there's] only intermediate and advanced to go.

‘‘I got honours in practical and theory, like Nadine, but got one mark less in the theory, with 94 per cent,'' Leighton said.

He said his examination was not quite as extensive as Nadine's, lasting only about an hour in total, with 40 minutes of practical testing.

Leighton said he would be going with his sister to the national championships in Palmerston North.

‘‘Last year I had to compete at under-18 level, because there was no under-16 grade, and I did okay at that, but I hope to improve this year,'' he said.

He said he was sometimes ribbed by his mates about doing Highland dancing.

‘‘It's true there are not a lot of boys doing it, but I always say to my mates [that] there's a lot more girls at dancing for me to meet than there ever is at their rugby games.''