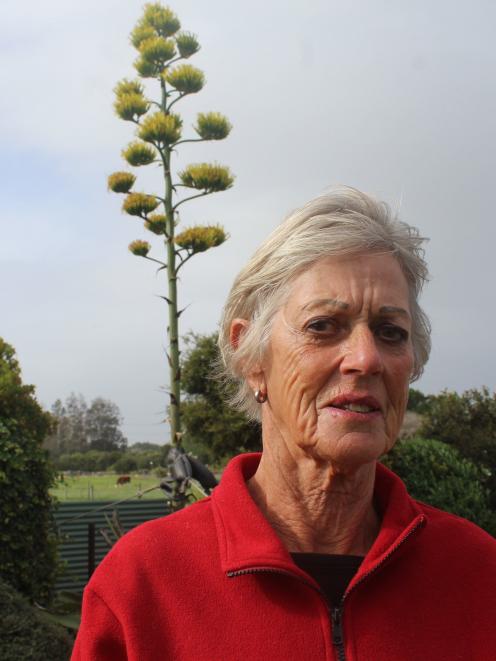 It was the first and last time the plant, which is native to Mexico and typically grows in the desert, would flower at her Otatara home in Invercargill. The plant dies after flowering.

Tucked in the wettest spot of the garden, it could not be further from a dry climate.

However, it was finally ready to thrive in the Deep South.

"I was coming up my driveway and I noticed some little blossoms," Mrs Luscombe said.

When she received the plant from her sister as a gift, it was a small household cactus.

It had since grown to 5.2m tall and was covered in fluffy sunshine-coloured heads.

For the past six months, she and her husband had been taking pictures and measuring it regularly to track its progress.

"It was growing about 10cm-12cm each week — we used a stick to reach up to the top of it and get the height."

In fact, it had grown so big, they had to tie the prickly beast to poles surrounding it to stop it falling over and coming out entirely from its roots.

It was nothing short of nerve-racking watching it get thrashed on a gusty day.

She had offered to give the plant’s "pups" to anyone who had the same patience.

Sadly, it would be the last time she could enjoy the tree herself before it died.

"I won’t see another one flower in my lifetime so I want to give the pups to the younger generation.