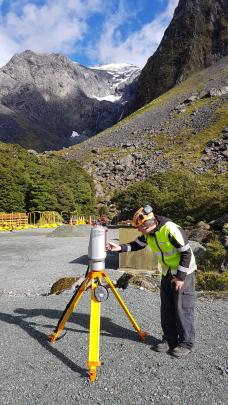 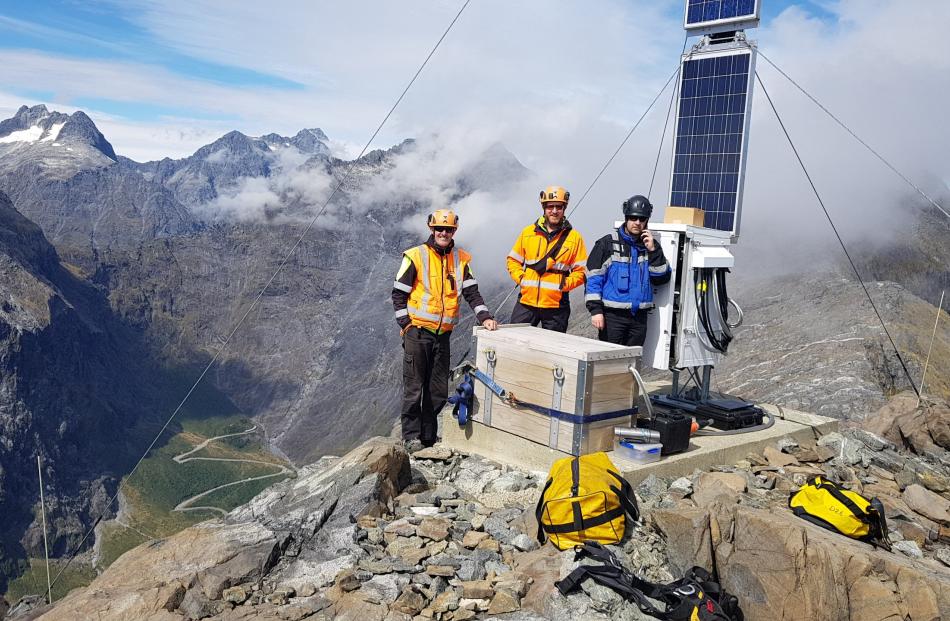 Milford Road Alliance crew check one of the seven alpine weather stations above the SH94 road. The Homer tunnel is in the background. 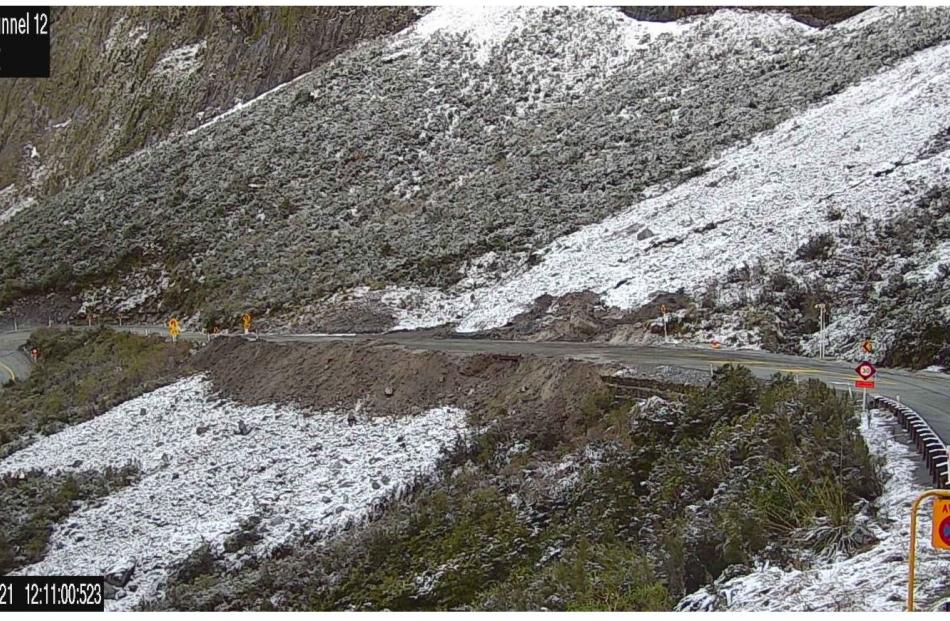 On Tuesday, the highway from Te Anau to Milford Sound reopened after the Milford Road Alliance had cleared the debris blocking the road following an avalanche. 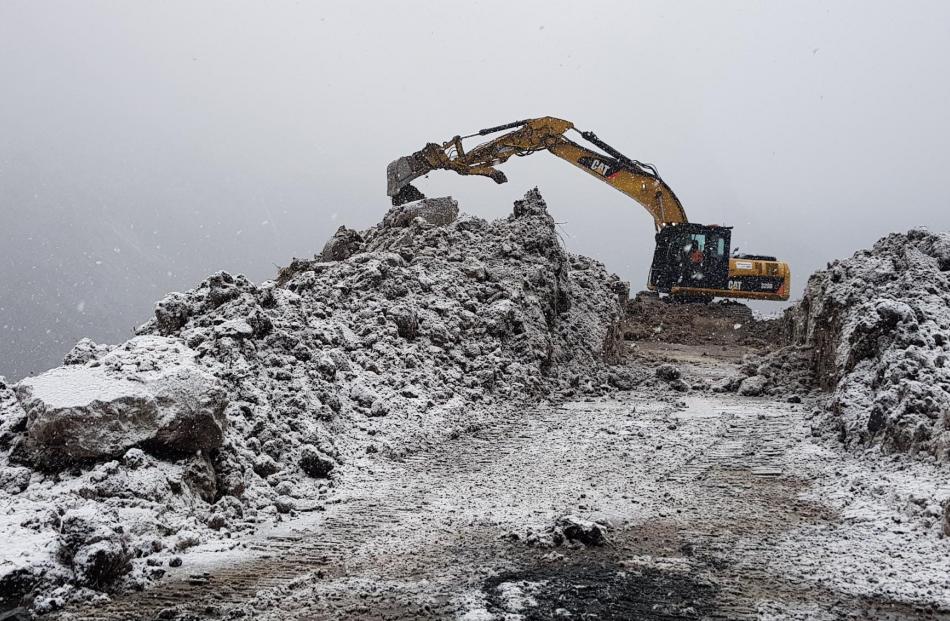 Working in treacherous conditions on rugged and steep terrain to open SH94 for road access. 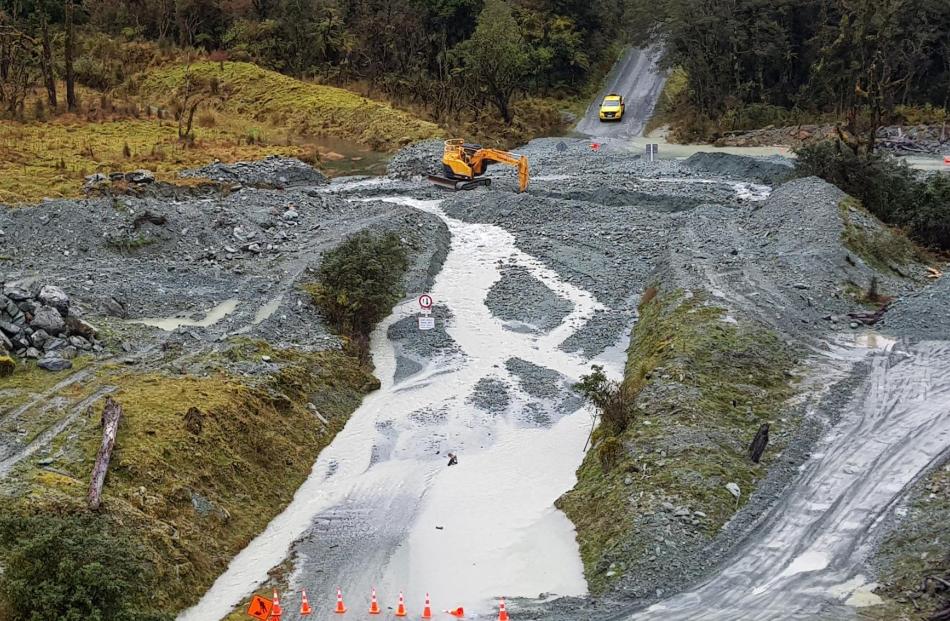 Bridges on the Hollyford Rd were washed away, a number of side creeks blocked bridges and some creeks went down the road scouring it out, in the most recent weather event.

Year-round access to Milford Sound is often taken for granted, particularly in summer, but there is always the potential risk of an avalanche barrelling across New Zealand’s only alpine highway. Kerrie Waterworth reports on the Milford Road Alliance team, which keeps the only year-round access by road into one of New Zealand’s favourite tourist attractions safe for travelling.

It might be spring in Fiordland but earlier this week SH94 between Te Anau and Milford Sound remained closed due to a high avalanche risk.

Milford Road Alliance had shut the highway from Hollyford Rd north to Milford Sound on Thursday, September 9, and on Monday large natural avalanches were still occurring.

“We appreciate that many of the businesses that operate in the Sound are inconvenienced by the current closure.

‘‘We will clear the avalanche material and get the road reopened, possibly for convoys during daylight hours in the first instance, as soon as it is safe to do so,” Mr Thompson said.

Reflecting on this past winter Mr Thompson described the past few months as a ‘‘real mixed bag’’, ranging from warm to very cold temperatures last month and the avalanche hazard varying just as widely.

‘‘Just as we went into lockdown the road was closed and we needed to get it open to let people out who needed to get to where they were going to spend lockdown. It was a busy day.’’

Several avalanche helicopter control missions had had to set off explosives to trigger avalanches to keep the risk low, he said.

‘‘We worked through Level 4, as there were 60-plus people in Milford Sound in lockdown and they needed to get out for medical or food supplies and deliveries.’’

Mr Thompson said it was always ‘‘a bit of a balance’’ keeping the highway open or restricting access.

Avalanches did not give much warning, started high in the mountains and could not be seen from the road, he said.

It was difficult to predict with absolute certainty when they would strike. The avalanche season ran until the end of November.

‘‘The winter season is staying later, spring temperatures and freezing levels are going up and down, so using natural processes to forecast avalanches — another natural process — is challenging.’’

A programme to monitor, assess and control the avalanche risk on the Milford Road was developed after a massive avalanche killed a road maintenance supervisor in 1983.

The Milford Road Alliance was formed three years ago and is a partnership between the NZ Transport Agency and Downer NZ.

It has a team of 25 people based in Te Anau and is the only road avalanche programme in New Zealand.

Mr Thompson said as well as predicting avalanches, the programme also controlled avalanche hazard by not allowing traffic to stop inside the avalanche area or closing the road and using controlled explosives to release avalanches before they occurred naturally.

Hands-on site testing through snow pits and measurements helped them to understand where the snow was accumulating, and the risk of it breaking away and potentially sending an avalanche on to the highway below.

At the Southern Hemisphere Alpine Conference held in Wanaka earlier this year Milford Road Alliance avalanche technician Simon Morris gave a presentation on his avalanche research into 3-D mapping of seasonal snow and the remote collection of snow and meteorological data.

‘‘Nine years ago, GPS took seven days to get 600 data points. Two years later, using survey grade GPS, we could get 16,000 data points in two days, now with the Lidar scanner we can get a billion data points in two hours, and we don’t have to be up there [on the mountains]. We can do it from road level,’’ he said.

The Lidar laser was bought in 2018 and was one of three operating in the world designed specifically to provide accurate snow pack measurements up to 15ml from a distance of 6km away.

Mr Morris said the laser scanner also provided the team with more ‘‘real time data and data from inaccessible terrain, which we have a lot of’’.

The data was used for snow depth mapping, detecting avalanche events and it would soon be set up as a 24/7 system to scan at night.

It was also used for avalanche mitigation.

‘‘This is to help with shot [explosives] placements, so if we know a storm is coming, we can scan the area and rescan it after the storm and determine where the thin areas are,’’ Mr Morris said.

The alliance was working with the University of Otago Mountain Research Centre to develop avalanche modelling software to help predict avalanches and to determine the ‘‘impact pressures’’ on the highway.

‘‘For us it is how much pressure does it take to move a vehicle off the road?’’ Mr Morris said.

So the next time you are heading in to Milford Sound under blue skies, make sure you check the avalanche hazard forecast.

Even when a moderate avalanche hazard is posted there is a risk of avalanches reaching the road and the road could be closed at any time.

‘‘Our team does an awesome job,’’ Mr Thompson said.