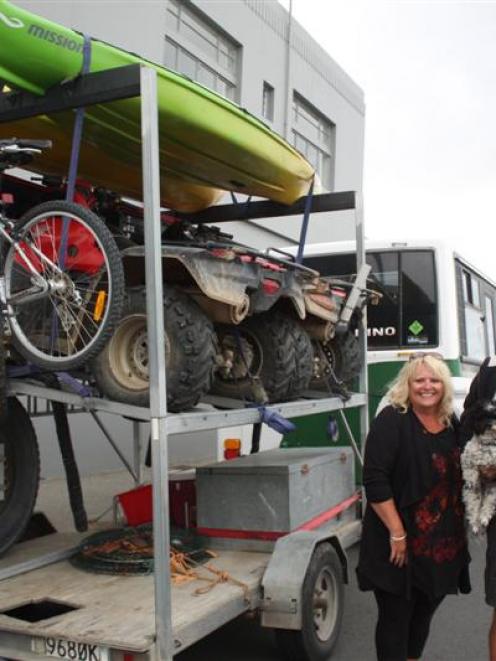 Christchurch couple Julie Truman and Mike Winter, and their dog Recho, were in Invercargill on Wednesday with their house bus and custom-built trailer for their toys. Photo by Allison Rudd.
When Mike Winter and Julie Truman go on holiday, they take the toys with them.

Mr Winter, an engineer, not only converted a 1994, 10.2m passenger bus into a motor home but built a trailer to carry all the things which he says make holidays enjoyable - canoes, quad bikes, mountain bikes and collapsible crayfish pots.

There is even space on the trailer for a jet-boat, but the Canterbury couple have left that at home this time round.

When they set off before Christmas on a four-month South Island road trip, they decided it was more prudent to pack a spare wheel for the house bus than a jet-boat, they said during a shopping stop in Invercargill earlier this week.

They have owned the fully self-contained house bus and trailer for about five years and said the combination was a conversation starter wherever they went.

Mr Winter said he and Ms Truman ''were sitting in the spa pool one Saturday night'' a few months ago when they decided to hit the road.

Their home, along with all the other houses in the coastal village of Brooklands, at the mouth of the Waimakariri River, was written off after the Christchurch earthquakes of September 2010 and February 2011.

They had bought a piece of land and were waiting for a new home to be built.

''We both said we were getting sick of our jobs and it was time to have a bit of a break,'' Mr Winter said.

''We had the bus and decided why not?'' They have already spent a few weeks in Central Otago and are now exploring Southland, stopping whenever they find an appealing camp site and staying for as long as they want.

From Invercargill, they plan to wend their way back to Christchurch via the Catlins and the East Coast.

Mr Winter will return to his job, but Ms Truman, who was a receptionist at a hairdressing salon, said she was still assessing her options.