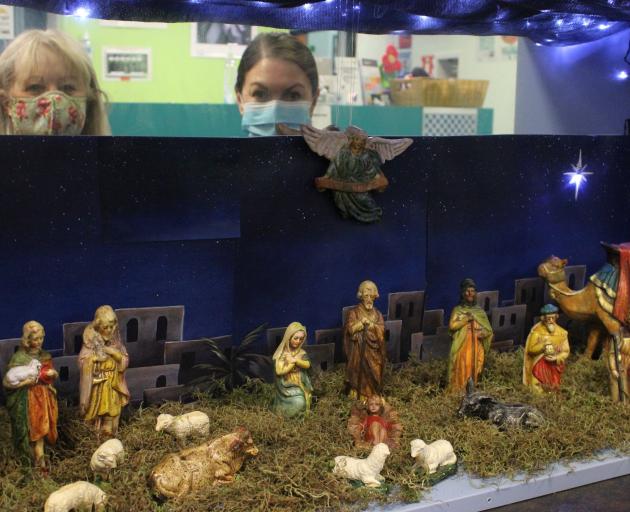 Where did the recently restored nativity scene originally come from?

Southland Hospital maternity receptionist Kim Perkins said information they had from former nurses put the display at the old Dee St maternity hospital as far back as 1958.

"That’s as far back as we know at this stage," she said.

"We know it was possibly gifted to the hospital by a matron and that’s all the information we’ve got."

The display had been through a few rough years, she said.

After a stint in the children’s ward, it was stored for a long time in the obstetric ward at the old hospital.

"Then it finally came back to us," Mrs Perkins said.

"They found it this year."

Unfortunately, it was badly damaged so Mrs Perkins’ mother, Josephine Carr (87), who had previously worked as a photo colourist painting black and white photos, began restoring it.

"She’s done a wonderful job of fixing them all up and giving them a facelift," Mrs Perkins said.

A case to put it all in was then assembled, including a painted background scene, straw-strewn floor and lights to depict the night sky, including the Star of Bethlehem.

Mrs Perkins said she had spoken to former nurse Jan Broad to try to gain some information. Mrs Broad was set to have lunch with former staff next week, and it was hoped more on the display’s provenance would be available after the get-together.

It was hoped if they could get some more information about the nativity scene, they would get a plaque made to make sure the details of the donation were never lost again.

"It’s a shame the history hasn’t come with some of these things," Mrs Perkins said.

The only distinguishing mark on the display is a stamp on the back of Mary which says "3591 Germany".

Charge maternity manager Sarah Stokes said the nativity scene was important because of its history and because it depicted the true meaning of Christmas.

Ward staff were also hoping to fundraise for a larger nativity scene to put in the waiting room at the ward’s entry.

The $5000 display was 1.2m tall and similar to one which was displayed in Wellington Hospital, Mrs Stokes said.

It was hoped, like the Wellington one, Jesus’ manger could be used to put babies in so parents could take their photos.

They were planning to set up a Givealittle page in the next few days to start crowd funding in the hope they could have it for next Christmas, Mrs Perkins said.