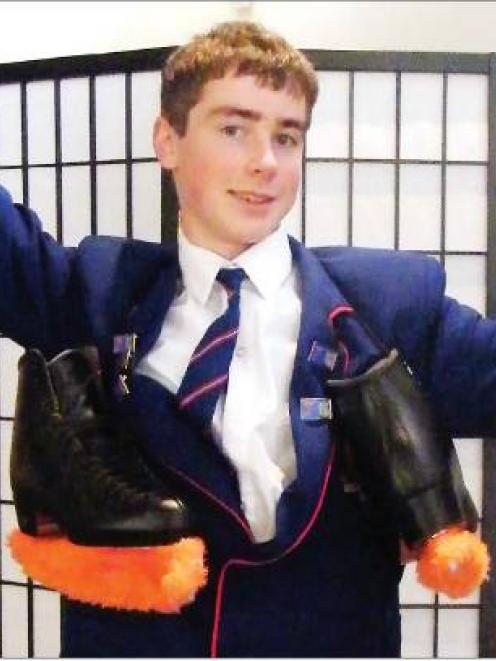 Classic pose: Shane Speden (15), an ice dancer from St Peter’s College, shows the pose he and his partner Rachel Gregory would use to end their routine.
Ice dancing may have reached its public pinnacle in the 1980s with Torvill and Dean at the Winter Olympics in Sarajevo, but for one Gore boy, ice dancing is his passion and sport of choice.


St Peter's College pupil Shane Speden (15) and his ice-dancing partner Rachel Gregory (21), of Dunedin, have just achieved selection for the Australian Nationals in Brisbane in August.

‘‘We competed in the selection trials in Dunedin last weekend and won selection, so I'm thrilled about that,'' Shane said.

He said his dance partner, Miss Gregory, attended university in Dunedin but was originally from Gore. The pair either trained in Gore or Dunedin, whichever was the most convenient at the time.

They had been coached for the past two years by Deanna Pielak-Jones, who was also based in Dunedin, so for Shane it had meant a lot of travelling.

He started skating at age seven.

‘‘I started off as a solo skater, but before long I decided that was not really my forte.

‘‘That's when I switched to ice dancing,'' he said.

He said the programme the pair performed at the selection trials would be ‘‘in essence'' what they would dance at the Australian Nationals.

‘‘We might have to tweak it here and there, but [it's] pretty much the same''.

‘‘We do a two-minute compulsory dance with set patterns and then a three minute free dance, which for us is a waltz.''

He said there were very few ice dancers competing in New Zealand. However, there was one other pair in the grade below them who would also be competing in Australia.

‘‘We are competing in the novice grade.''

The pair will have to find the money for the trip themselves, although some assistance is provided by the New Zealand Ice Skating Association.

‘‘I also get support from the Mataura Licensing Trust, but we'll have to do some fundraising ourselves.''

Shane said his mediumterm goal was to compete in the junior world championships next year.

‘‘I will need a younger partner to do that though, because Rachel's too old for the Junior Worlds.

‘‘It's pretty hard to find a partner in this sport.''

Shane said he trained alone about six hours a week at the Gore Ice Rink and he and Miss Gregory trained together as often as they could.

‘‘We grab whatever time we can. During the school holidays we had a lesson in Dunedin at 4.30am.

He said if he wanted to reach the top in the sport there was no option in the long term but to go overseas.