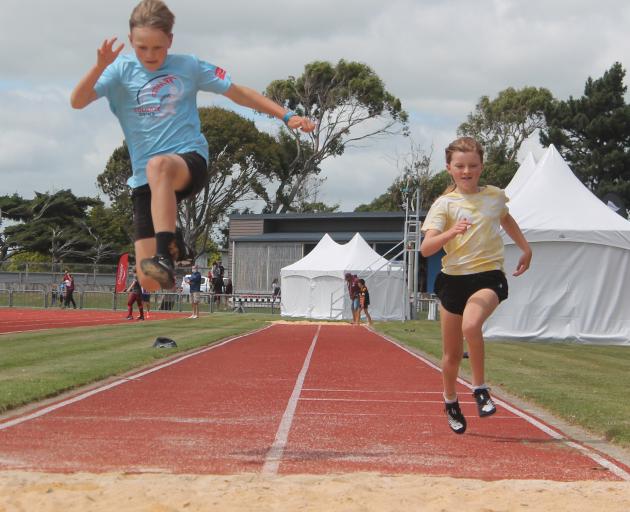 More than 800 young athletes are preparing to run, jump and throw their way to success at the South Island Colgate Games at Surrey Park, Invercargill.

Bea Christie (13), of Invercargill, said she felt a mix of excitement and nervousness about competing at home.

"It is good because we know the track quite well but when we travel to other locations, it feels more like a serious competition.

"I think in the end it will be better for us because we feel more comfortable, like another weekend training."

Oran Sim (12), of Nelson, was helping sister Alanna (10) practise long jump as it was her first year at the event.

"It is very fun and a great opportunity to see some national athletes who hold records in the junior categories," Oran said.

St Paul’s Harriers and Amateur Athletics Club coach Frank O’Boyle is in charge of the biggest delegation at the event with 45 athletes.

"It is obviously a competition, but what I think is very special in the games is the friendship which these kids build.

"It is amazing because they don’t see each other often, but always reconnect during the games."

Athletics Invercargill chairman Chris Knight said it was an honour for the city to host such an important event.

"It brings people from all around the country to see Invercargill so the economic benefit for the region is great."

Both men hoped the games would bring exposure and awareness for athletics in the region.

Athletics New Zealand chief executive Pete Pfitzinger was delighted the event, for children aged 7 to 14, could go ahead under Covid-19 restrictions.

The organisation was "really amazed and pleased" with entry numbers, he said. About 70 clubs would take part.

"It is a kind of a family tradition and we hope everybody has a lot of fun."

The games will be held at Surrey Park from today until Sunday. Vaccine passes are required for people aged over 12.