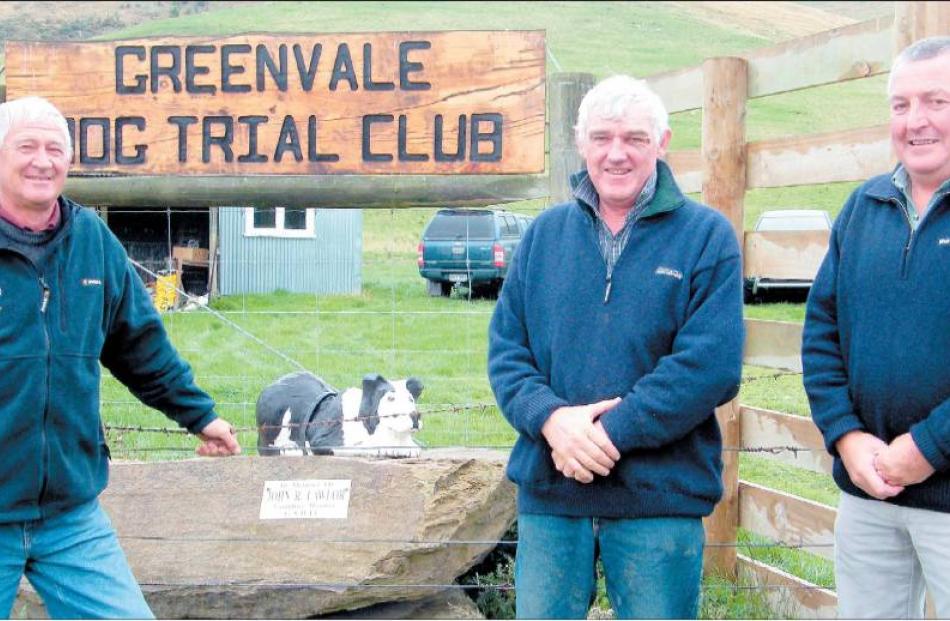 The Greenvale Dog Trial Club is 76 years old this year and throughout its long history the club has only had one postal address for its secretary- but that is about to change.

Since its inception in 1932, the club has changed locations several times before ending up in its current location on Allan Stewart's property in 1972, but the only two secretaries the club has ever had lived in the same place.

Greenvale Dog Trial Club secretary Mervyn Gutschlag took over the position in 1982 from his father Eric Gutschlag, who co-founded the club and acted as secretary and treasurer for 50 years.

Mr Gutschlag and his wife Glenys will be moving to Gore, where they are building a house, later this year but plan to remain heavily involved in the Greenvale area and with the dog club.

‘‘I still have 1500 acres out here, so I'll be around as much as possible,'' Mr Gutschlag said.
Awarding Mr Gutschlag life membership was a recognition of his service, club president Paul McCarthy said.

‘‘There is an awful lot of work involved with putting a dog trial on and it's important to recognise those who have contributed greatly,'' Mr McCarthy said.

As secretary of the club for 25 years, Mr Gutschlag has certainly done his share of work.

‘‘There's always a lot of work to do on the day of a trial,'' Mr Gutschlag said.

‘‘Generally, the secretary looks after the paperwork, organisation of competitors, registration and is responsible for keeping a record of club activities.

‘‘Since the trials are always registration on the day, it's impossible to tell how long we'll be out there.

‘‘Up to 80 entrants can turn up with anywhere from three to five dogs each and trials can go from sunup to sundown.''

Mr Gutschlag said he was thankful for the community participation throughout the years.

‘‘It takes a lot of people to put a trial on, up to 20 people per run, and we've had a lot of volunteers out here who have never had anything to do with dogs before, but have turned up to help on the day,'' he said.

Mr McCarthy said the dog trials were a great community event that received a lot of local support.

‘‘It's something that everyone can be a part of,'' Mr McCarthy said.

‘‘It's not just men and their dogs, there are stages for all different skill levels and last year we had a ladies competition.''

Club member for more than 20 years and former club president Jack Meehan said traditionally, Greenvale had been a strong club with good representation and Mr Gutschlag's involvement with the club had been an important contribution to its success.

‘‘It's great that Mervyn is being recognised for his efforts in this way,'' Mr Meehan said.

Mr Gutschlag said the move to Gore was inspired by his 60th birthday and some opportunities which were presented to him.

‘‘I had an opportunity to sell some land to the dairy industry and the timing seemed right,'' he said.

Mr Gutschlag will remain as secretary of the Greenvale Dog Trial Club despite moving to Gore and is getting ready for local trials on April 9 and 10, as well as the upcoming Southland championships on April 28 and 29, the biggest event held at Greenvale.