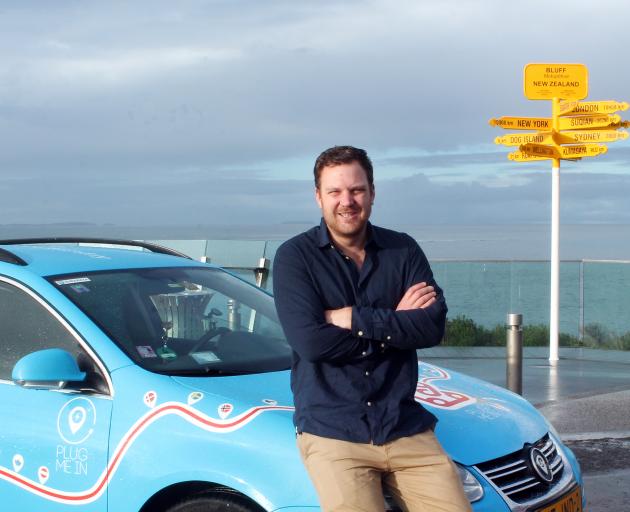 Yesterday he completed the final leg of his 100,000km low-emission journey at Stirling Point in Bluff.

On March 15 2016, Mr Wakker left Amsterdam in an electric car on a mission to showcase the advantages of sustainable mobility.

It has taken him more than 1200 days to reach Bluff, after a road trip through 34 countries in Europe, the Middle East, India, Southeast Asia, Australia and New Zealand.

"It is very [exciting] to finally arrive here - in the most southern place in NZ [sic]," he said.

Mr Wakker had his own set of rules for the trip, including travelling without money, relying on the support of people to offer a meal, place to sleep, or electricity to charge his car.

He said the trip cost was about 25,000 ($NZ45,522) and would not have been possible without the help of sponsors, donations and a kind gesture from people who registered in his website, "Plug in".

During the journey, he engaged with sustainable initiatives and did not fill the car with petrol at any time, but had some issues, such as having to get some tows in Australia.

However, he believed living with a different host every day was one of the main challenges.

"Talk about the same story every day, and [answering] the same questions! Of course I love to talk about it, but after a long time, it starts to get a little bit [repetitive]," he said.

"Wiebe's journey is not only a positive example of how far you can travel using low-emission transport options, but also highlights the importance of individuals, businesses and communities becoming more environmentally aware."

She said Southland has 18 electric vehicle charging stations, and a further eight will be installed along the Southern Scenic Route shortly - at Te Anau, Manapouri, Tuatapere, Riverton, Fortrose, Curio Bay, and Papatowai.

After more than three years on the road, Mr Wakker confessed he was glad his trip has ended, and was ready to return to home with his car, the Blue Bandit.

He was looking forward to writing a book about his experiences and starting a business which engages with sustainable delivery.

"I was looking forward to [finishing] my trip, [getting] some sleep and [hiding] from the world ... I think my life [is] never gonna be so exciting if compared with what I have been doing for the past three years."