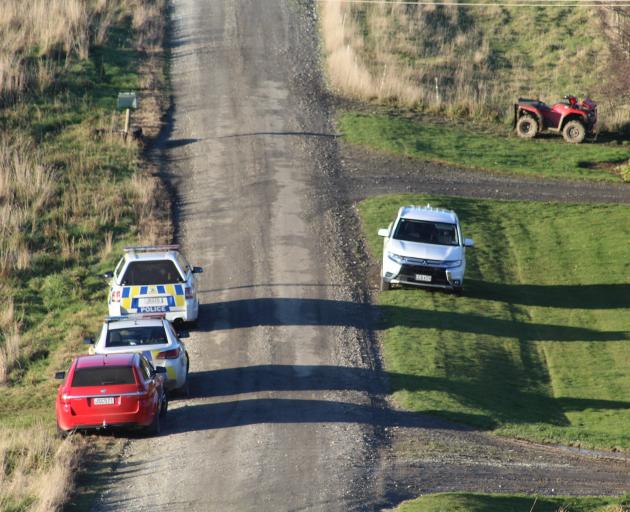 Police were seen parked in the rural Southland town of Glenham yesterday following a tractor accident which killed a man and left another injured. PHOTO: ABBEY PALMER
Two Southlanders have died in as many days as a result of vehicle crashes in the region.

A man was killed on a farm in Glenham in Eastern Southland yesterday after the tractor he was in rolled down a steep hill.

A WorkSafe spokeswoman confirmed a person had died, while another was taken to Southland Hospital with moderate injuries.

Emergency services were called about 11am to the property in Glenham, about 12km from Wyndham, after reports of a workplace incident involving a tractor.

A neighbour at the scene, who wished to remain anonymous, said he learned of the accident when another neighbour came rushing into his home to use his phone to call emergency services.

"He came and got me after he heard the tractor go down.’’

The tractor had fallen down the hill directly opposite his property, which was likely due to "slippery conditions", he said.

The man who died had only recently moved to the family farm in Glenham, so he ‘‘didn’t really know him well’’, the neighbour said.

Another neighbour, who lives at the entrance to the rural road, said he heard sirens "speeding past" his home early yesterday morning.

"When the ambulance came back down, there were no sirens on."

A St John spokesman said a rescue helicopter and an ambulance were dispatched to the scene, but the helicopter was not needed.

The 86-year-old woman who died on Sunday was involved in a two-vehicle collision at the intersection of Morton and Centre Sts in Invercargill about 3.50pm last Wednesday.

Police said the woman, who was taken to Southland Hospital in a critical condition, died on Sunday.

The cars involved in the crash were a red Toyota Echo and a dark green Nissan Maxima.

Police said investigations were ongoing and they would like to hear from anyone who witnessed the crash or saw either of the vehicles before or after the incident.