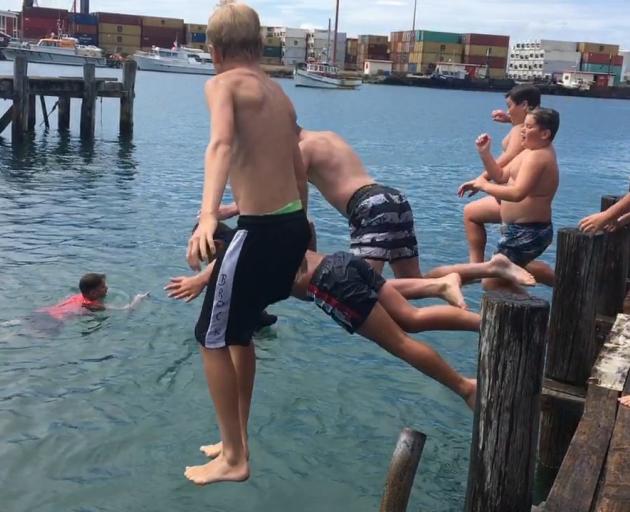 Children jump off the wharf at a boat ramp in Bluff in January. Photo: Sharon Reece
A concern for children’s safety is resurfacing in Bluff as summer approaches.

A public meeting about children swimming around a boat ramp in Bluff Harbour is set to be held by the Bluff Community Board in coming weeks.

The issue of "swimmer safety and conflict with boat use" was raised at a board meeting last Monday,  leading to the decision to host the meeting, board chairman Raymond Fife said.

The issue was first highlighted in January this year after complaints from boaties about swimmers blocking the ramp.

While there had been no recorded incidents, a child being injured at the ramp would cause "major issues", Mr Fife said.

"Where they are jumping, the recreational fishermen do sort of turn in that way when they’ve been out to sea for the day, so that’s probably highlighted the issue more than what it has in the past."

Mr Fife did not want swimming in the area to be banned entirely.

"It’s a good place to swim in the sea and the children enjoy it around the areas they go to, so it’s something we would try to avoid," he said.

Bluff resident Sumaria Beaton said the right for children to swim there was "very important" to the community.

"Generations have been swimming off the jetty and surrounding [wharves]. To not have a right to swim in these areas would be very devastating for our community.

"Banning our community from swimming is not the answer," she said.

Mr Fife agreed swimming in the area was a rite of passage for Bluff children, having himself swum in the area as a child.

"In those days there was no recreational boats, hardly any around whatsoever, so it was probably a lot safer then than what it is now."

A date for the meeting had not yet been set.