No charges but force excessive 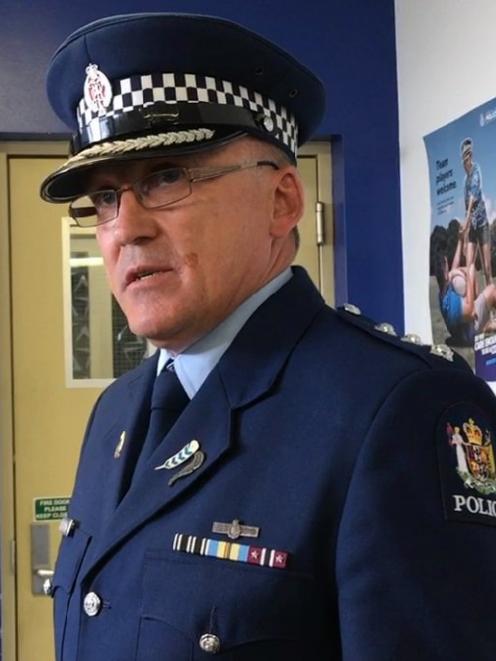 Southland area commander Inspector Mike Bowman. Photo: ODT files
An Invercargill officer who put a drunk woman in a headlock and pulled her to the ground will not face criminal charges, despite a independent investigation finding the use of force unjustified.

On July 25, 2020, the officer — along with three other police officers, approached the woman and her friends who were drinking in a liquor-ban area.

They told the woman to pour out her remaining alcohol, and the police officer then entering into a verbal exchange with the woman, where he used unprofessional and inappropriate language.

Two officers who were at the scene said the woman made insults and comments towards the investigating officer, telling him to ‘‘die already’’.

They remembered the officer retaliated by abusing the woman and telling her to shut up.

The officer told the IPCA he could not remember exchanging insults with the woman.

He recalled her abusing him once, but said he often gets verbally abused and he would not have taken it personally.

He admitted he might have told the woman to shut up.

“Sometimes you’ve got to speak to them [offenders] in a language they understand and if you’re really nice to them, they don’t understand it,” the officer told the IPCA.

The woman then kicked some empty cans and the officer immediately grabbed her arm and arrested her for disorderly behaviour.

The officer alleges the woman tried to “hit’’ him but CCTV did not support his account.

“The timing indicates he did not first attempt to communicate with her to resolve the situation without the use of force,’’ the report states.

The officer placed the woman in a headlock then pulled her backwards on to the ground.

It appeared the woman kicked the officer as she struggled to get him to release her.

The Independent Police Conduct Authority’s (IPCA) released the findings of its investigation yesterday.

IPCA authority chairman, Judge Colin Doherty believed the officer had retaliated in anger at the woman’s attitude and the force used was disproportionate and excessive.

“The officer’s frustration resulted in him using force which good policing would have avoided.”

One of the officers at the scene said the woman was being “difficult and belligerent”, but was not being threatening.

The investigation began after one of the officers at the scene expressed concern about the level of force used by his colleague during the arrest and the officer’s inappropriate language towards the woman.

Police yesterday acknowledged and accepted the IPCA findings in relation to the incident.

Southland Area Commander Inspector Mike Bowman said the use of force was not justified on this occasion.

“Using a headlock as a restraint method is not an approved or a current tactic, and the actions of the officer have not met the high standard we [expect] of our staff.”

However, the report says a version of the headlock tactic was being taught by Invercargill police until April this year.

Following the recommendation of a national advisory panel, police decided to not to file any charges against the officer.

However, the officer involved is subject to an ongoing employment investigation.