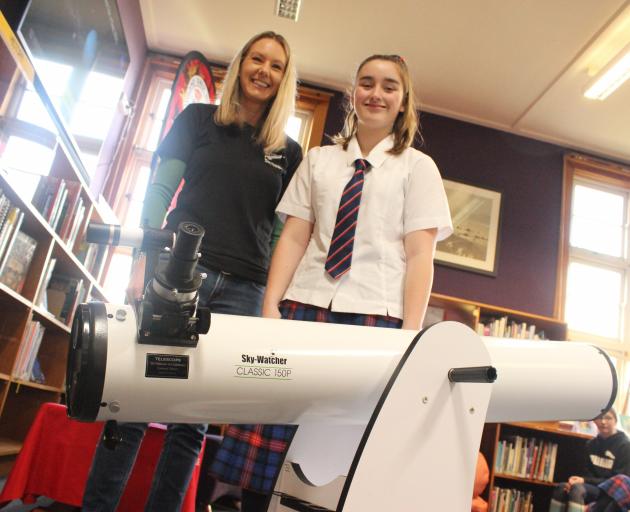 Sophie (12) was yesterday awarded her prize as the national winner of the National Aeronautics and Space Administration (Nasa) Scientist for a Day essay competition in the years 7 and 8 category in a presentation at her school in Invercargill.

They then had to write an essay of up to 300 words explaining which of the moons they would want to explore with a robotic spacecraft.

Sophie wrote her essay from the perspective of the space craft in 2039 as it left Oberon and the data it had collected which could lead Nasa to discoveries such as how the moon was made.

It was the second year Sophie had won the category and it came as a complete shock to her.

Ms Breach said the essays were blind judged so the results were purely merit based.

Sophie’s passion for space and her drive to educate others on space opportunities available to school pupils was phenomenal, Ms Breach said.

"We’ve got to pick up our game; Sophie’s leading the way."

Her prize this year was the same as last year’s, a Sky-Watcher 6-inch Dobsonian telescope from Astronz.

As she already had one, Sophie decided to gift this telescope to the Deep Cove Trust so other school pupils could get a closer look at space in a place which had no light pollution.

"Helping educate others on what is really out there," she said.

Sophie’s passion started after she visited Nasa in 2018 with her parents.

On her return, she wanted to make sure all those who did not have the same opportunity, could still consider the industry as a career.

As well as winning last year’s essay competition, Sophie had had a visit from Nasa interns at her school last year after winning Fair Go’s Consumer Heroes special which invites children to come up with problems and ideas on how to fix them.

Her idea was to help solve the problem of more girls getting involved in the space industry — something she hoped to continue for a long time to come.

"I want to be the Nano Girl for the space industry."