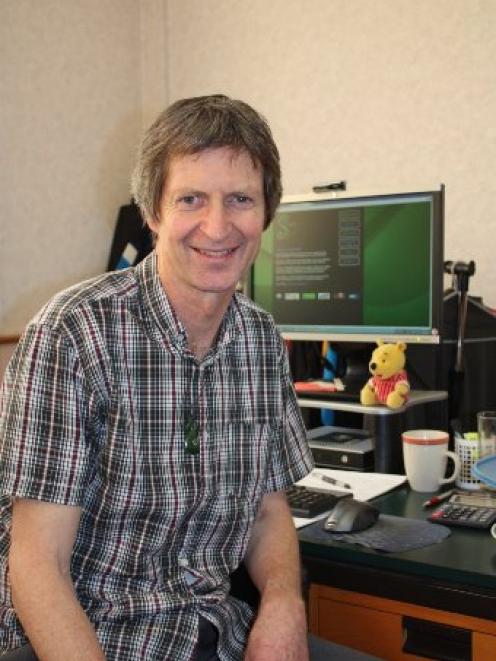 Southland Spirit of a Nation brand co-ordinator Gerry Forde in his office at Venture Southland. Photo by Allison Rudd.
In the next 12 months, Gerry Forde hopes to help rural Southland communities raise at least $500,000 for worthy local projects, and that is on top of the $120,000 he has help raise in the past 12 months.

He has come up with a concept which is simple but effective - an evening of entertainment and challenges which pit two teams against each other, followed by a fundraising auction.

It would work in any rural or provincial area, he says, but probably not in a big city.

''You couldn't do this in Auckland or Wellington. Rural communities have a good sense of identity and the concept works off friendly rivalry - the 'our town is better than yours' thing.''

But the trick is that rather than one group trying to go it alone, the organising and the proceeds are shared.

''On every committee you get one or two passionate people ... with this approach you get the cream of the crop.

"There are some really talented people out there with sales, marketing and motivational skills. This brings them together for a common goal.''

Mr Forde, who is based in Invercargill, gives free advice and helps the organising committee source prizes for the auction.

He has refined that process, too. Rather than just asking for donated goods, he negotiates deals.

In farming communities, farmers were prepared to pay thousands of dollars for an item of equipment or farm service they could use, he said.

Likewise, families or friends would band together and spend significant amounts of money on group prizes such as travel and holiday packages.

''So we look for high-end, useful products like quad bikes or drench or holidays which retail at up to $10,000, then I approach the supplier to get it at cost or just a bit more, and approach the retailer for a bit of a discount, too.

Mr Forde said it took him some time to convince national retailers he did not want a product for nothing.

''I remember talking to one person for quite some time, until he suddenly said: 'hang on, you mean you want to pay us?

'''It's a new way of thinking ... but it creates a win-win for suppliers, retailers and event organisers.''

Mr Forde had a programme of 14 events through to the middle of next year, of which five had already been held.

Lessons had been learnt along the way, he said. The events had been analysed, things which did not work so well tweaked and those which did were developed further.

''For example, ticket sales for the first couple of events were quite slow. Then I came up with the idea of making that the first team challenge.

''Whoever sold their quota of tickets in the fastest time would win the first points on the board.''

''We tried it with the next event. The Dipton team took two weeks to sell their tickets.

The Limehills team organised a barbecue and sold all their tickets in seven minutes. It was like ticket sales for a Bon Jovi concert.''

In tough economic times, successful fundraising was a necessity for any community, he said.

''Internationally, sponsorship has dropped 55%. Businesses locally don't have so much money to give away and funders like the Community Trust of Southland don't either.

Volunteerism has dropped too, so community groups are being hit from all sides.''

He said his greatest pleasure from the events to date had been to see clubs on the organising committee discussing between them whose need was greatest.

''Three times, groups have negotiated a bigger share of the profits for one particular group. That should be what it's all about.''

Supporting rural Southland's ''grassroots fundraising'' was a change of tack for Mr Forde, the Southland Spirit of a Nation brand co-ordinator.

The regional identity brand was established 15 years to provide practical aids such as flags, logos and merchandising for local authorities, councils and clubs promoting Southland.

Mr Forde, a well-known public figure in Invercargill for 25 years and a former trainee Catholic priest, dustman and radio and television commentator, became the co-ordinator 13 years ago.

Two years ago, direct funding for his role was cut, although Venture Southland (a joint committee of three Southland councils which provides tourism andeconomic development services) still provided him with an office, administrative support and access to a vehicle.

He had become an independent contractor, his income solely derived from sponsorship and sales of brand items.

While he admitted the past year had been tough for him financially, he was happy to stick with it.

''I'm here for the community. That's what spins my wheels.''