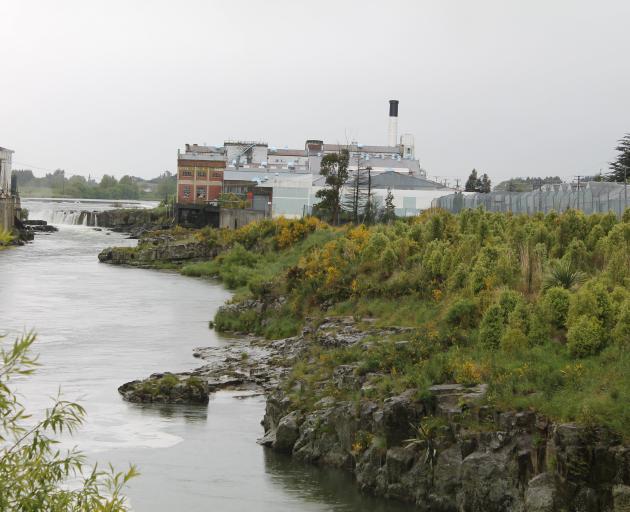 The former Carter Holt Harvey paper mill on the banks of the Mataura River, is now used to store class 6 hazardous substance ouvea premix, a fertiliser precursor. Photo: Margaret Phillips
Southland officials say they were ''nervous but not worried'' as floods threatened a hazardous chemical store in Mataura last week.

The former Carter Holt Harvey paper mill in the Eastern Southland town has been used to store about 10,000 tonnes of fertiliser precursor ''ouvea premix'' since 2014.

The former paper mill sits beside the Mataura River, and has long been a source of concern for residents and public officials due to dangers presented by the material when mixed with water.

During a flash flood on February 1, which washed out the river's Pyramid Bridge about 55km upstream from the town, Mataura had come close to ''environmental disaster'' Gore District Council chief executive Steve Parry said.

However, although last week's flooding reached nearly double the flow rate of February, peaking at about 850cumecs on Wednesday, at no time was the public at risk.

''Naturally, when floodwaters rise we all become nervous. But what we know is the flood pattern is as significant as measures like flow rate in determining the way they behave, and Environment Southland were monitoring closely during last week's adverse events and telling us all was well. In fact, there was a significantly greater risk to the store from the February flood.

''We all breathed a sigh of relief when that passed without incident.''

In addition to that at Mataura, 12,000 tonnes of premix is stored at sites in Awarua and Invercargill.

The premix was previously owned by Taha Asia Pacific, which went into liquidation in 2016.

In March, a $4 million package was brokered by the council to effect its removal from Southland.

The deal was struck between NZAS, the Government, Southland councils and the landlords of premix storage sites.

Together, NZAS and the Government would cover 75% of the costs, and the councils and landlords the remainder.

Recently, the Gore council had begun negotiations with an unnamed offshore processor for purchase of the material, and Mr Parry said he was ''comfortable'' matters were proceeding as quickly as possible.

He hoped to conclude a deal before Christmas.

''Given we can get matters over the line by then, I'd hope to see trucks on the ground by the end of summer removing the material safely.''

Clutha-Southland MP Hamish Walker said since the removal package had been announced, residents' anxieties had begun to abate.

''I've had two residents raise concerns with me in the past 12 months, and I remain in regular contact with [Gore Mayor] Tracy Hicks, who ensures me everything is being done to remove it as soon as possible.''

Mr Parry said it would take between two and two and a-half years to remove all traces of premix from Southland.

In the meantime, consent conditions would remain in force, including monitoring of ammonium levels.