Roadside birth: 'It could have been much worse'

By Tim Miller
1 Comment
The Southland mother who gave birth to her son on the side of the road yesterday morning says the situation could have been much worse.

As a result of her experience with the newborn, Amanda McIvor will now join the campaign to improve maternity services in the South.

Clutha-Southland MP Hamish Walker has also written to the Prime Minister this morning, asking her to reinstate full services at the Lumsden Maternity Hospital.

Early yesterday, Ms McIvor knew she was in labour so called her midwife, Sarah Stokes, who advised her and partner Gordon Cowie to drive to Lumsden from their home between Mossburn and Te Anau for an assessment.

"We knew from the start of my pregnancy we would have to go to Invercargill because there wasn't anywhere else, so there was no waiting around when the time come. So we just got in the car and went."

After being assessed by Mrs Stokes, it was decided to send her to Southland Hospital via St John ambulance, because there was no oxygen or back-up life-saving equipment. 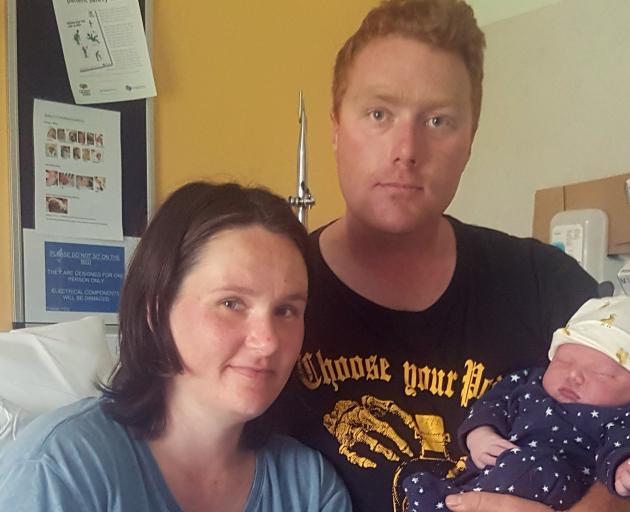 Both mother and baby were doing well but the situation could have been much worse, she said.

"I had a minor bleed and it could have been a much more dangerous situation if I didn't have such an experienced midwife with me."

It has been more than a month since the town's maternity centre was downgraded as part of a regionwide overhaul of maternity services by the Southern District Health Board, but critics have said the promised maternity services meant to replace the clinic have not been delivered.

Mrs Stokes previously told the Otago Daily Times she was expecting many more roadside births due to the closure of the town's birthing unit.

Following the experience Ms McIvor and Mr Cowie would be much more active in the campaign to retain the maternity centre.

In a statement, health board chief executive Chris Fleming said he was aware of the situation and was pleased both Ms McIvor and Levi were doing well.

"We're currently implementing our network of services and monitoring its implementation and we'll review this incident as part of our continuing evaluation of services across the district," Mr Fleming said.

The maternity facility in Lumsden was not a planned place of birth but there was equipment available to conduct a birth in cases of emergency, he said

Equipment on site included medications and fluids for emergency situations as well as a warmer and a neonatal resuscitation device to assist establishing breathing.

Mr Walker said the situation would not have happened if the Government had not cut maternity services in the town.

The situation was unacceptable, especially as it was completely avoidable, he said.

This is absolutely appalling.... the government needs to take a long hard look at themselves I cannot believe that the working group in that meeting knew after that meeting nothing had been delivered as promised and still these mums are left hanging. I would like to see how they would react if it was their families delivering on the side of the road. Come on this is NZ only $400,000 is needed to retain Lumsden per year that is peanuts to this government. I cannot imagine how cold it would have been for that mum and the people helping her not to mention the worry of no oxygen !!! I’m pleased to hear mum and baby are doing well (that is luck) next time it may not be so lucky is this Government prepared for that !!