'Severe low flows' in some rivers 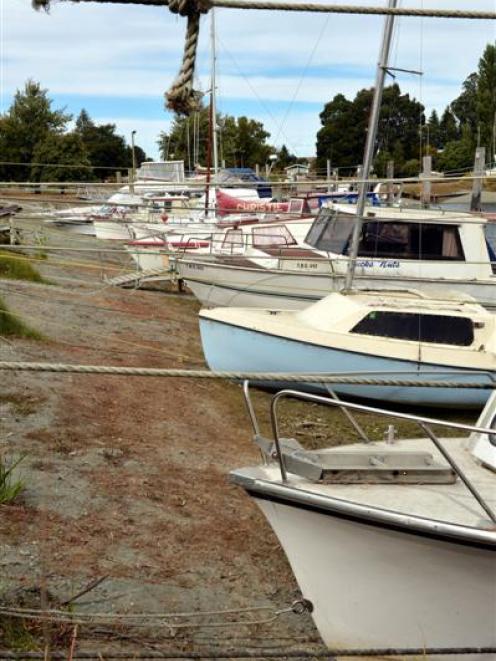 Boats at the Te Anau marina nosed up on dry land yesterday. The level of Lake Te Anau has fallen over recent weeks. Photo by Stephen Jaquiery.
More Southland rivers have reached severe or significant low flows, but Environment Southland has held off convening its water shortage response group.

Rivers throughout the region have been declining for weeks.

The middle reaches of the Aparima, Oreti and Mataura were all at ''significantly low flows'' levels. Rain is predicted on Sunday, Monday and Tuesday. Mr Tuckey said the situation would worsen by early next week if the rain did not come.

Environment Southland staff met yesterday to discuss whether the water shortage response group, which is led by the Southland Rural Support Trust, should be convened.

They agreed to meet again on Monday to reassess the situation, he said. On Monday, 45 consent holders were told to stop taking water for irrigation and other purposes.

The council had fielded calls from members of the public reporting irrigators operating around the region, Mr Tuckey said. Checks showed all consent holders whose cut-offs had been triggered had stopped irrigating.

However, each consent was different and many irrigators were legally able to continue taking water, either because their cut-off had not been reached or because their consent was issued several years ago before cut-off clauses were routinely included.

A total fire ban was put in place across Southland yesterday and will remain in place until further notice. Apart from gas-fuelled barbecues, no fires are permitted on Stewart Island, anywhere in Fiordland and Southland and parts of West Otago, including the Blue Mountains.

All fire permits are cancelled and no more will be issued while the ban is in place. It was unusual to have a total fire ban in March, Southern Rural Fire Authority principal rural fire officer Mike Grant said.

''Usually, we are taking total fire bans off at this time of year, not putting them on,'' he said. Hosing restrictions were put in place on Wednesday in Invercargill and Bluff and residents were urged to conserve water.

There had been a small decrease in consumption so far, Invercargill City Council water manager Alister Murray said yesterday, but ''demand is still higher than we would like''.

City residents used between 26.5 million and 28 million litres of water daily, he said. The water comes from the Oreti River. In the 24 hours to 8am yesterday, usage had dropped 1.4 million litres over the previous day.

Mr Murray said he did not have a reduction target but hoped as the word spread about the need to conserve water, a more noticeable reduction in consumption would be seen.