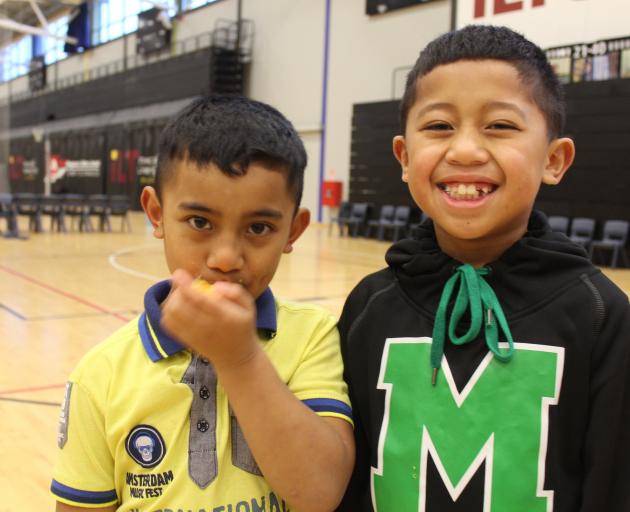 Invercargill children Taoa Fiso (7, left) and Ene Molioo (8) at the Pasifika Youth Sports Day at ILT Stadium Southland this week. PHOTO: ABBEY PALMER
After losing a Pasifika youth to suicide in Invercargill last year, four local church ministers are on a mission to prevent such a thing happening again.

Rev Lole Fiso, Pastor Jim Wasasala and the Revs Mose Peteru and Vilisoni Vehekite have formed the Southland Pasefika Pastoral Committee — an initiative aimed at addressing the issue of suicide and mental health among Pasifika youth in the region.

Mr Fiso said the intention was to bring Pasifika youth together and offer them pastoral care, with a focus on enhancing ties to their culture and the role it plays in forming their identity.

"We lost a church member to suicide in December last year — it’s just happening too much.

"The goal is to add more of an opportunity to reach out to our Pasifika youth, talk about suicide prevention and bring unity into the Pasifika youth community."

It was first committee of its kind, and the theme was to "get fit", not just physically but also mentally and spiritually.

"The parents and elders are really pleased with what we’re doing here."

Plans developed by the committee included sports days, youth church services and eventually a weekend camp where the focus would be on suicide prevention and wellbeing.

Earlier this week, it hosted its second sports day at ILT Stadium Southland, where more than 150 Pasifika youth and their families gathered to play a range of sports.

"Some of the young people didn’t even know some of the other Pasifika youth in Invercargill," Mr Fiso said.

The number of people who attended had grown significantly since the first event at the start of the month.

"We advertised in the community and got feedback from last time.

"It’s not just church members here now — it’s expanded to a much wider group, which was our aim."