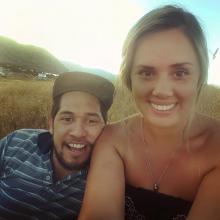 On May 9, 2014, Kahu Vincent was continuously beaten and had his head stomped by Ahu Taylor  and Leon Rowles  as he lay motionless on the floor of the Wanaka Night ’n Day store.

At his trial in the Invercargill High Court last year, Taylor was convicted of attempted murder and sentenced to 10 years and eight months in jail with a non-parole period of five years. In 2015, Rowles was charged with intent to cause grievous bodily harm and sentenced to seven years and one month, with a minimum jail term of three years, six months, after appealing his original sentence of eight years.

Mr Vincent was placed in an induced coma for 12 days after the attack and suffered traumatic brain injuries.

Though he now runs his own gib-stopping business in Wanaka, Mr Vincent has still not fully recovered from the attack.

His partner, Jade Makuru,  said after Rowles’ sentence was reduced last year they feared the same would happen to Taylor’s sentence.

"We didn’t really have our hopes up after the other appeal but we’re pretty happy with the outcome of this one this time."

Taylor’s lawyer, Marie Taylor-Cyphers,  appealed the length of the sentence as he felt aggrieved he was charged with attempted murder and Rowles was not.

In the Court of Appeal’s decision released to the Otago Daily Times, Ms Taylor-Cyphers said the grounds for the appeal related to Taylor’s intent.  In order to find Taylor guilty of attempted murder, the jury in the original trial was required to be sure he intended to kill Mr Vincent. Ms Taylor-Cyphers placed weight on the fact no weapons were used in the attack as well as the fact Taylor kicked Mr Vincent in the ribs which had no logical connection to an intent to kill.

In its decision, the court ruled there were no grounds for Taylor’s sentence to be shortened and considered the distinction between his sentence and Rowles’ to be justifiable.

Miss Makuru said the family now hoped they would not hear anything about the two until they were released from prison.

Mr Vincent still suffered from fatigue and anxiety caused by the attack but liked to look on the positive side of life, Miss Makuru said.

The couple’s young children Vana (5) and Kobe (3) were also happy to have their dad back.

"It’s still hard for Kahu to get out in public and do family and stuff but it is definitely getting better."

Another milestone the couple were looking forward to was getting married next year after Mr Vincent proposed on New Year’s Eve.

"That was another thing out of Kahu’s comfort zone," she said with a laugh.