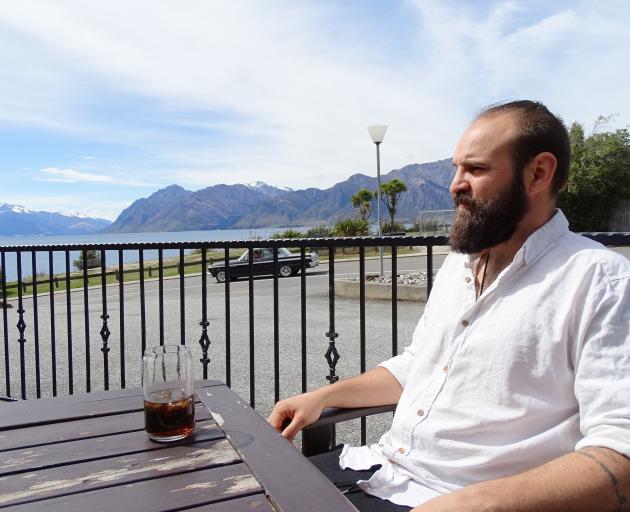 Wanaka Ode organic restaurant owner Lucas Parkinson is closing his doors early next month. PHOTO: KERRIE WATERWORTH
A pioneering Wanaka chef who survived a fire destroying his restaurant and the economic downturn from the Covid-19 lockdown says the Auckland restrictions in August were his third strike and he is out of business.

Ode Conscious Dining chef and co-owner Luke Parkinson opened the restaurant in Post Office Lane, Wanaka, in May 2017 with the philosophy of using only organic, ethical, sustainable, seasonal ingredients, primarily from the region.

He said the first six months were "really bad" but by the summer he was full just about every night.

In August 2019, a year later, Ode had reopened with a staff of 17 and was doing "really well" until the first Covid-19 lockdown closed its doors.

"At the end of May we did not have enough funds to reopen after the first lockdown ended, so I said I am going to make apple crumble for $10 each, with free home delivery.

"I thought I would sell a few hundred and I woke up the next day to my manager frantically trying to contact me saying we had almost 900 orders and what should they do?"

Mr Parkinson said he sold two tonnes of apple crumble and made $20,000, enough to pay off his suppliers and "bump-start us reopening on July 2".

During the Auckland restrictions he realised 80% of his customers were from out of town, he said.

On Friday night Mr Parkinson announced he had made the "heart-wrenching" decision to close the restaurant on November 8.

"It is not that it is a bad business model and if we did not have Covid, I would be in the money.

"I don’t feel a failure. I feel that this is out of my control," he said.

Mr Parkinson said he was living one day at a time but was "reaching out to investors and partners" in a last-ditch effort to keep Ode open.

"A lot of people are struggling in Wanaka, even those with good foot traffic.

"It is just the way it is with no international tourists.

"A lot of people are feeling the pressure," Mr Parkinson said.

I feel sorry for Parkinson, Restaurants are a high risk business even in the best of times, but to be establishing a new restaurant, practically totally reliant on the tourism trade in a pandemic, well... it's tough times.
From reading the article I get the impression that he was heavily focused on the financial aspects as opposed to providing a service to his customers. While keeping an eye in the cash flow is undoubtedly important in any business, when times get tough your personal mind set becomes equally as important. As I say, I get the impression that Parkinson may not have had his head in the right place.

Read for comprehension "Ode Conscious Dining chef and co-owner Luke Parkinson opened the restaurant in Post Office Lane, Wanaka, in May 2017 "In August 2019, a year later, Ode had reopened with a staff of 17 and was doing "really well" until the first Covid-19 lockdown closed its doors". When was this virus a thing again?, 2020 wasn't it, so no he didn't open his restaurant "in a pandemic", seems you don't have your eyes in the right place besides it seems his restaurant would cater to all people tourist or no and why open a business if not to make a profit?, do you expect people to open a business purely out of the goodness of their hearts?.