`Bring Our Birds Home' campaign head Paul Brennan said the company that owned the plane, Infranero, approved of the sale and the group was awaiting clarification about how to go about the transaction.

Mr Brennan was thrilled by the news.

``It's a fantastic thing. We got it at a modest price considering it's a cultural artefact for our country.''

But the campaign is not stopping there. The aircraft are set to turn from forgotten pieces of metal into TV stars.

The group has a deal with Nik Coleman Television to film the recovery to restoration phases for the show Plane Resurrection, broadcast worldwide on Netflix.

Mr Brennan said the story was likely to be told across two series of the show.

Plans for filming would begin once the group had secured the DC-8 in Manaus.

Mr Brennan said filming was likely to take 18 months to two years and be screened about 2020.

He said he had already filmed some behind-the-scenes footage so the story was likely to be ``really good viewing'' once Mr Coleman became involved.

Proceeds earned from the show would probably accelerate the recovery process of the other planes, Mr Brennan said.

The other aircraft are a DC-10, a Lockheed Electra, Boeing 737 and 747, the latter two of which are still in service.

Each was the last remaining example of its type, which originally flew in New Zealand. 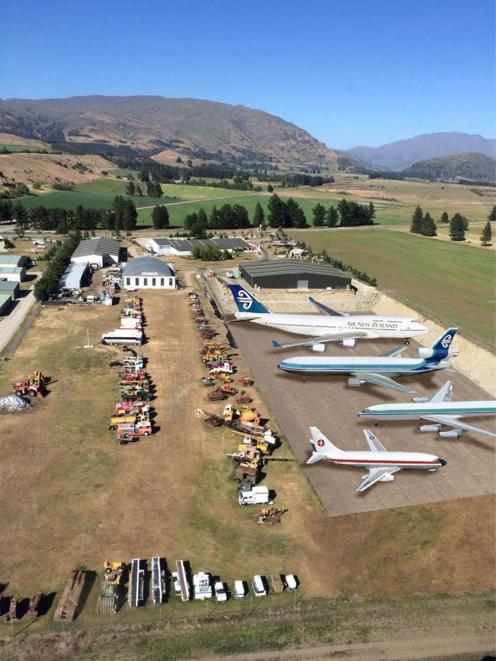 Wanaka’s National Transport and Toy Museum could be home to up to five historic airliners, as shown in this artist’s impression of the restored aircraft at the museum. IMAGE SUPPLIED
Mr Brennan will discuss the fate the DC-10, which is in Havana, when he meets Cuban ambassador Mario Alzugaray on Wednesday.

He hoped it could be returned to New Zealand as a gift to the country from Cuba, as the plane is owned by the Cuban Government.

Mr Brennan would like to see the three-engined jet brought back to Wanaka and put on display with other passenger planes previously operated in New Zealand.

He said Wanaka was the ``best possible venue in the Southern Hemisphere'' for such a display.

``From day one, seeing these aircraft being restored will be a remarkable display.''

He also thought it could serve as a memorial for the Erebus crash of 1979, when an Air New Zealand DC-10 crashed on Mt Erebus in the Antarctic, killing all 257 people on board.

It remains the worst aviation accident in New Zealand's history.

Mr Brennan said tourism was likely to be New Zealand's leading industry in the future, and showcasing displays such as this would only help it continue to grow.

``[The country] has to do stuff like this. We need good attractions if we want people to come here.''

He said the DC-8 and DC-10 could be on display within five to seven years.

However, that was not the priority.

``The goal is to save them from becoming scrap metal. If we don't act they'll be lost forever.''

A Give a Little page started in February has so far attracted $20,000 in pledges.

A charitable trust is to be set up with the Transport and Toy Museum in order to receive larger donations towards the cause.

Mr Brennan was still sorting out which method to bring the ``birds'' home, but said when the time was right, both planes would probably be brought home in parts, by sea.

He hoped the planes would not need to be broken down into too many pieces, as that would make the restoration job more difficult.