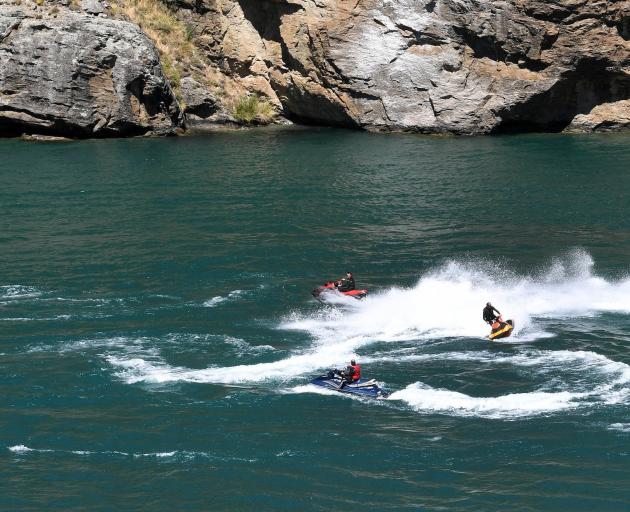 Jet-skiers play on Lake Dunstan recently. PHOTO: STEPHEN JAQUIERY
The number of boats and jet skis on Lakes Wakatipu and Wanaka is down this year compared to previous summers but there are still hot spots where people are ignoring the boat code safety rules and local bylaws, causing "mayhem".

Queenstown Lakes District Council harbourmaster Marty Black said harbour staff had been very active in busy crowded areas such as Eely Pt, on Lake Wanaka, but as soon as they leave "it just turns to mayhem".

He said Queenstown Lakes maritime enforcement officers could issue instant fines of between $300 and $500 for infringements but "staff cannot be on the water all the time".

He believed hiring more maritime enforcement officers was not the way to improve bad boatie behaviour.

"We have people out there on jet skis, three jet skis on the go on Lake Wanaka fulltime and two on Lake Wakatipu.

"We don’t need more staff; the problem is we don’t have national maritime rules and regulations for small-boat owners."

"You have people right around the country who can go and buy a jet-boat or a jet ski that can do 60 or 70mph and they don’t even know the basics," he said.

Mr Black said it was not just an issue for Queenstown Lakes District’s lakes and rivers, it was an issue right across the country.

"Whether this Government will do something about it I am not sure.

"It will depend on how many fatalities there are and what happens from there."

Mr Black said this was the 35th summer he had been "hammering" for the wearing of life jackets to be made compulsory, for ID on all boats and a compulsory day skipper course, but so far it had fallen on deaf ears.

In the meantime, for the best advice on boating safety he recommended the Maritime New Zealand website.