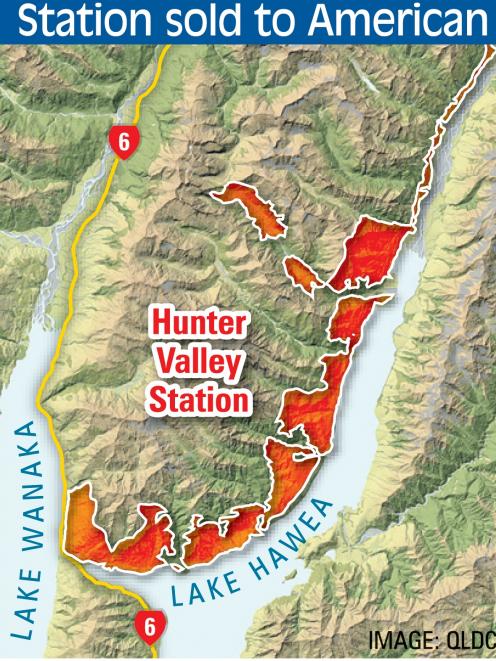 Mystery surrounds the American buyer of a high country station beside Lake Hawea.

The Otago Daily Times understands an American businessman has been granted consent by the Overseas Investment Office to buy 6468ha Hunter Valley Station.

The station has been leased by the Crown to the Cochrane family for more than 40 years.

Lessees Taff and Pene Cochrane put the sheep and cattle station up for sale in 2010.

The station has a five-bedroom homestead, cottage and shearers' quarters.

Also on the property are stables, haysheds, covered yards, a woolshed, 10 huts, four airstrips, 200km of fencing and 80km of vehicle tracks.

The estimated capital value of the property is $13.2million.

An application to the OIO was made in June last year.

Stretching 35km along the north shore of Lake Hawea into the Hunter Valley and surrounded by mountains and native bush, the station has been described as one of the most picturesque in New Zealand.

Scenes for the Disney film A Wrinkle In Time, starring Reese Witherspoon and Oprah Winfrey, were shot at the station last week.

Mr and Mrs Cochrane could not be contacted for comment yesterday.

In the OIO's decision summary, the buyer is listed as being 100% American, with Orange Lakes (NZ) Ltd listed as the consent holder in the purchase.

In an online profile, Mr Benington says he has advised many overseas investors on taxation and compliance issues and has experience with foreign investment and knowledge of international tax laws.

In its decision, the OIO said the buyer would continue to farm sheep and cattle on the property and intended to invest capital in the farm to significantly enhance its production.

There was also a willingness from the buyer to enable public access to several important sites in or near the station.

Public access to parts of the station has been a contentious issue in the past.

In 2015, the Cochranes temporarily blocked access to Meads Rd, which provides the only road access to the Department of Conservation's Kidds Bush campsite.

Access to five huts on the land, some used by the same family for more than 50 years, was also blocked.

Hut owner Drybread farmer Tony Glassford said he had heard rumours an American businessman had bought the station but he had not been contacted by anyone to discuss access.

Overseas ownership of land near Wanaka was highlighted after it was revealed American billionaire Peter Thiel had bought 193ha of farmland near Glendhu Bay in 2015.

Two other high country stations in the Upper Clutha, Lake Hawea Station and Lake McKay, are also in the process of being sold.