Mr Darby was among about 300 people at yesterday’s blessing of stage three of Wanaka’s lakefront development project.

The grebes have a social media following and are popular with Wanaka locals and visitors.

The public stroll beside Lake Wanaka's nesting grebes at the opening of the new lakefront walkway. PHOTOS: MARJORIE COOK

"John and I saw it from the very beginning but overall we are very happy with how it went and this whole team was very considerate of the grebe and us," Mr Hermann said.

"That we’ve got 18 pairs out there at the moment is pretty indicative of how well they have been looked after by the contractors," Mr Darby said.

The blessing was led by Kai Tahu manuwhenua Paulette Tamati-Elliffe and Komene Cassidy.

They welcomed the crowd, blessed the $3.7million stage three project, told the story of how Lake Wanaka was dug by the chief Rakaihautu, with his ko (a tool similar to a spade), and sang a waiata. 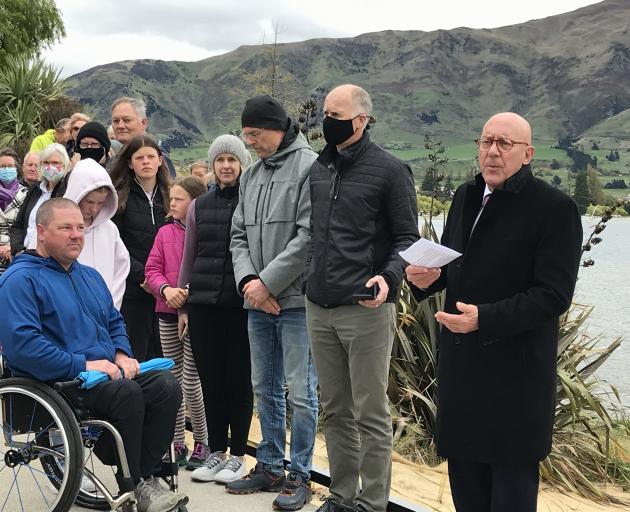 Queenstown Lakes Mayor Jim Boult (right) thanks the contractors and designers who worked on stage 3 of the Wanaka lakefront development.
The Queenstown Lakes District Council set aside about $13million in 2016 for the ambitious five-stage lakefront project.

It will eventually provide continuous pedestrian access and links to the town centre, while enhancing ecology and the visibility of Kai Tahu in its design.

Queenstown Lakes parks and reserves officer Diana Manson said it was "just wonderful to see the vision come to life".