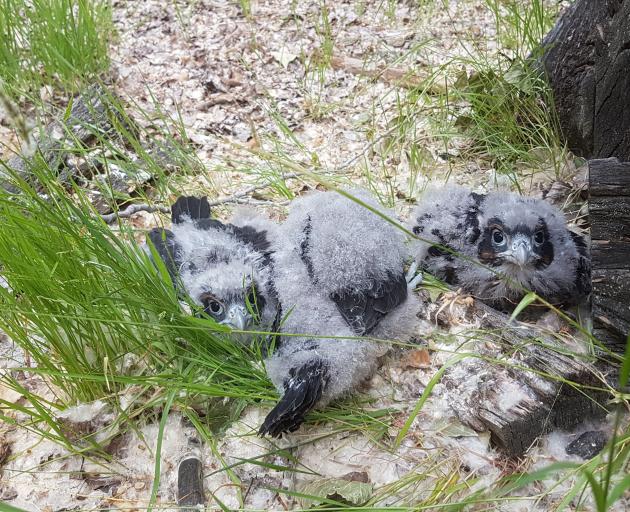 Three chicks found and tagged as part of the Cardrona Karearea Conservation Project have been successfully raised. PHOTO: PARKER CONSERVATION
A few locals and their dogs being dive-bombed by aggressive falcons did not get in the way of a conservation success story in Albert Town.

Project leader Ewan Mackie said they took on responsibility for monitoring the breeding pair of karearea at the confluence of the Cardrona and Clutha rivers in Albert Town.

"It was also the willingness of the people of Albert Town and Wanaka to give these birds the space they need that has enabled the successful raising of these three endangered chicks," he said.

Karearea nest on the ground and this nest site was next to a trail and car parking area popular with local dog walkers and cyclists.

"Karearea are incredibly aggressive at defending their nest sites and this pair were known to be dive bombing people and dogs in the area," Mr Mackie said.

"We spoke with a number of people who were glad to see the birds given the space they need and were happy to walk around the area."

The Karearea Conservation Project was established two years ago and is a community project led by Cardrona Alpine Resort.

The project’s goal is to protect New Zealand’s only native falcon species and also increase the scientific understanding of the bird, sometimes known as sparrowhawks, in the alpine environment. Ornithologist Graham Parker, of Parker Conservation, who is overseeing the scientific research, said the two other nesting sites monitored this breeding season failed due to attacks by predators.

"We have evidence of additional birds in the Cardrona Valley with regular sightings reported, but we are not finding as many nests as we would expect.

"This may be attributed to mammalian predation of the nests on the ground, and further research is needed," he said.

Mr Mackie said the project had finished the scientific survey stage this breeding season but the community could stay involved by recording sightings of the birds, allowing them to continue to chart their progress and survival rates.

Each bird has a unique coloured band on their leg, and sightings can be reported on the project website.