Wanaka police are cautioning people to be careful with their cooking equipment outdoors after a large blaze destroyed a Department of Conservation reserve at Glendhu Bluffs on Sunday.

An investigation by Fire and Emergency New Zealand (Fenz) is not complete but Senior Constable Bruce McLean wrote in Wanaka’s Crimeline [issued this morning] that police knew what the cause was.

‘‘As most people are well aware there was a large fire in the Glendhu Bay area. We know the cause of the fire.  Make sure you are careful cooking and use NO naked flames or smoking in the outdoors where the ground is tinder dry.

"A fire doesn’t take much to start and gets out of control very quickly,’’ Snr Const McLean said.

The 280 hectare fire is understood to have started between Wanaka-Mt Aspiring Rd and Emerald Bay. Fire and Emergency NZ incident controller Jason Sarich of Dunedin said on Monday it could be at least a week to complete the investigation.

A fire investigator has visited the site.

Fenz has this morning confirmed the fire is now contained.

Mr Sarich said the fire did not spread last night and four crews of firefighters were today focusing on dampening down hotspots identified by thermal imaging early this morning.

The hotspots are all within the 7.1km perimeter of the containment area.

Today's crews are from Glenorchy and Dunstan and the Department of Conservation.

They would be working in earnest to address the hotspots ahead of the hottest part of the day, when fires could flare up. 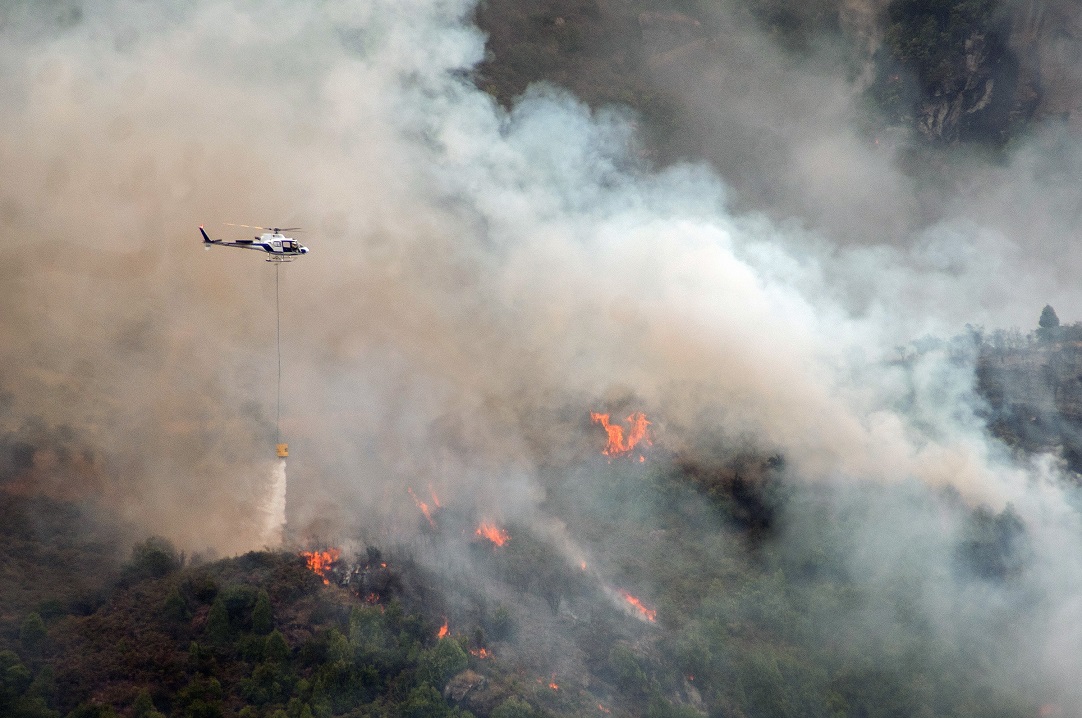 A helicopter empties its bucket in the fight against the fire on Glendhu Hill. PHOTO: SHANNON THOMSON
Weather conditions today would be windy with high temperatures and low humidity.

This was challenging from a firefighting perspective so crews would be on alert to ensure the fire remained contained.

A police media spokesperson has confirmed the fire investigation is not a police matter at this time.

"Fire and Emergency are conducting an investigation into the fire - which would need to be completed before Police would potentially be involved, if at all,'' the spokesperson said.

Sergeant Kim Chirnside has confirmed Wanaka police have received information about how the fire started but referred the Otago Daily Times to Fenz and police media teams for more information.

Fire and Emergency media spokeswoman Sally Chesterfield said no charges had been laid in the fire investigation.

A fire investigator was still working on site today.

The fire was reported at 1.30pm on Sunday and was about 80 percent contained by Monday night, when it had a 7.1km perimeter.

At the peak of the blaze, eight fire crews and nine helicopters with monsoon buckets were at the scene.

Seven power poles were burned down, affecting 78 Aurora Energy customers, the majority of whom had power restored by Sunday night.

Aurora Energy communications spokeswoman Lisa Gloag said on Monday the crews were waiting for clearance today so they can begin replacing the poles and reconnecting about 35 remote customers.

In the meantime, generators would be delivered to those affected.

Road access past the fire zone on Wanaka-Mt Aspiring Road would be controlled this week.

There are concerns the fire could flare up during an ongoing period of hot, dry weather.