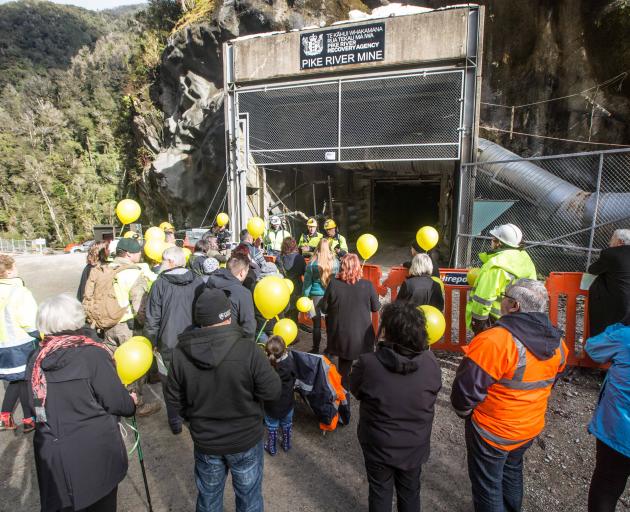 Teams are not expected to reach ''pit bottom in stone'' - 1.9km inside the drift - until at least August.

Three teams of miners will enter the drift leading into the mine as the re-entry progresses - the first for an initial reconnaissance, the second to look for evidence and a third to advance mining services.

The Pike River Recovery Agency says the first team of up to six will assess the state of the drift and look for ventilation, geotechnical and any other hazards.

It will also have a preliminary scan for any forensic evidence.

Any work to make the drift safe will then take place, before a second ''forensically focused'' mining team enters to examine and remove any evidential material found.

A third team will then enter, advancing the mining services, including gas monitoring, communications lines and ventilation bags, which provide fresh air.

There were cheers and tears on Tuesday as the $36million re-entry began.

Agency chief executive David Gawn told RNZ yesterday morning more risk assessment reviews would be undertaken and later yesterday a ventilation system and vent bags would be taken as far as the seal previously installed 170m inside the drift.

That seal would be upgraded to an engineered design.

''We will actually pause for a bit and do some pressure tests,'' Mr Gawn said.

After about five to seven days the agency would then start to dissect the first seal, at 30m, and remove all the water infrastructure, which could take six to eight weeks.

At the same time it would finalise plans to go beyond the 170m seal.

When it reaches the pit bottom,

a forensics team would step up its involvement.

The agency would build a ventilation control device, enabling it to have a stable atmosphere for police to enter.

''It's not really been explored.

''We know there's a debris field. It's also in the area of the Hawea Fault.''

Inside the drift looked as though nothing had really changed over nearly nine years since the explosions.

''That's very positive. It certainly points to smoother rides ahead.''

Mr Gawn said the plan was to hand over the mine site to the Department of Conservation by the end of this year.

The re-entry is not to recover bodies, which are believed to be in the mine workings, on the other side of the rockfall, but to inspect the drift for any evidence to show what went wrong, and that might be used to bring prosecutions.