By Laura Mills
0 Comments
Miners, farmers and whitebaiters and others from all walks of life stood shoulder to shoulder with politicians in a Greymouth park yesterday to demand that the West Coast's voice is heard.

Early 'guestimates' put the crowd size at Messenger Park at 3000.

The rally, titled 'Naturally Together', was called to protest a raft of Government changes that are about to hit the West Coast, impacting on everything from whitebaiting to mining and farming to forestry.

No one from the Labour-Green Government was present, but five National Party politicians attended, including party leader Simon Bridges. NZ First was represented by list MP Mark Pattinson.

The rally was good natured and well behaved, with people from as far south as Haast there. However, feelings were running high.

Greymouth Mayor Tania Gibson got loud applause when she told the Government to "talk to us, rather than about us".

"Our economy is on a knife edge," she said, citing the example of one small business which had lost $70,000 in a month due to the Omoto slip closing the road and rail links.

She spoke of Coasters as environmentalists, who cared deeply for their region, but business owners were afraid and investors were wary. 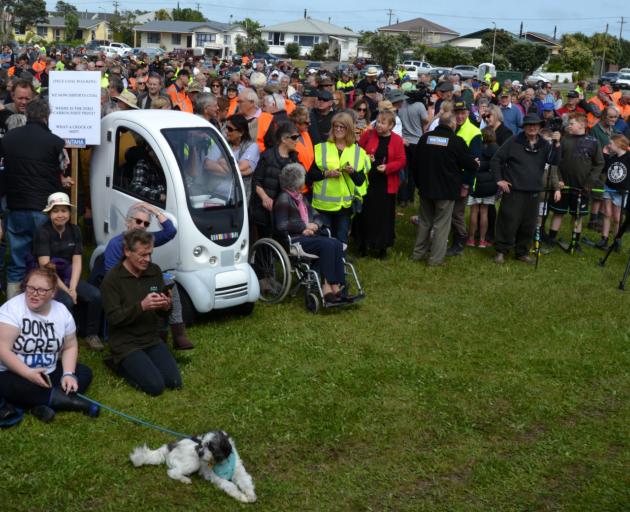 Photo: Laura Mills
The West Coast needed to diversify, but it had to be done sensibly, Mrs Gibson said.

"We appeal to the Government to listen to us."

Westland Mayor Bruce Smith told the crowd this was not New Zealand's nuclear-free moment: "It's our reduction in income moment".

He pointed out that every MP had been invited to attend yesterday.

"It's politics which have brought us here today," Mr Smith said.

The country would end up importing dirty, low coal quality coal to keep the Huntly power station going for people in the cities, while mining jobs on the West Coast jobs were "exported".

He got the biggest cheer when he talked about the Waitaha River hydro decision being declined earlier this year.

Richard Tacon from coalmining company Bathurst said there were 800 mining jobs on the Coast (mostly in Buller) and a further 2000 to 3000 in downstream service industries.

Outside of work, those people ran sports teams, and staffed fire brigades. Without them, communities would become "deficient".

Ashley Cassin from Glacier Country Tourism said the freedom camping issue may have to be raised with Simon Bridges. More generally, he said "we are all in this together".

Federated Farmers national president Katie Milne, who farms at Rotomanu, said Coasters wanted to be in charge of their own destinies.

She quoted former Hokitika and Kumara MP Dick Seddon, who went on to become New Zealand's longest serving prime minister and who coined the phrase "God's own".

"He knew the value of the primary industries."

Andrew Priest from Ngai Tahu Forestry said the company was committed to the Coast, planting 800ha a year, and harvesting 800ha a year. It employed 80 directly, and 250 at sawmills and transport firms.

Westpower was widely supported in its quest to overturn the Government rejection of the Waitaha power scheme.

"It ain't over yet," Reefton-born Mike Newcombe, the Westpower chairman, said.

Greymouth teen Montana Lancaster was a highlight singing the Crowded House song Don't Dream It's Over, accompanied by images of West Coast industry played on a large screen.