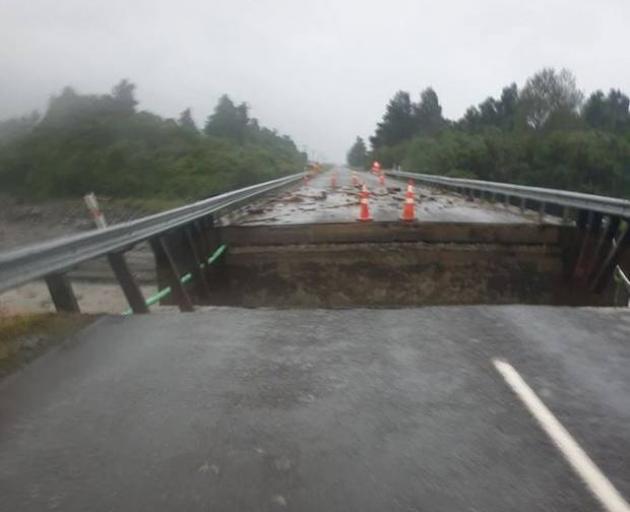 Damage to the Little Man Bridge on State Highway 6 at the weekend. Photo: NZTA
It is time to consider whether West Coast infrastructure needs more investment, a government minister says.

Civil Defence Minister Peeni Henare was commenting after the second flood in a year cut off the tourist towns of Franz Josef and Fox Glacier.

"People come here because it’s a place of natural beauty. With that comes many challenges.

"I definitely think it’s got to be part of the conversation," he told media yesterday.

"We have experienced a lot of ‘push back’ from international agents who are risk-averse and some are rescheduling their itineraries down the east coast."

"The ramifications are a potential drop in visitors during the peak season and associated drop in expenditure."

Rental vehicles left behind by tourists flying out to connect with international flights or tour other parts of the country were being managed using the system developed after the Kaikoura earthquake, he said.

Power and water were on and food, including bread, milk and fresh fruit, were being flown in yesterday to restock the supermarkets and restaurants.

The NZ Transport Agency confirmed it hoped to reopen the road to the south later this week.

To the north, the road over Mount Hercules - the worst affected - could be open to one lane by Christmas.

Mr Henare said the ministry was mulling using Air Force helicopters to fly out those with young children, without insurance, or with health needs.

Private operators were bringing in more aircraft to take out those who could afford to pay.

Mr Henare told the Greymouth Star he wanted to assess the needs in Franz Josef and Fox Glacier, and would use the Air Force if needed.

He stressed the assessment was not just about tourists, but locals too - including farmers and businesses.