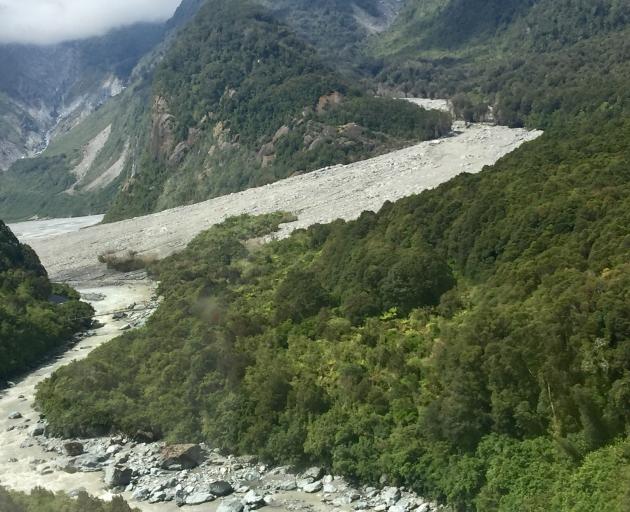 The slip at Mills Creek is pushing into the Fox River, which in turn has wiped out the access road. PHOTO: JOHN BAINBRIDGE, WDC
Mother Nature 1, Westland 0 - that was the verdict yesterday as Fox Glacier residents started pondering the reality of life in the tourist village without foot or road access to the glacier.

The Department of Conservation revealed on Friday the access road had been washed out again, by the largest active slip in the country, at Mills Creek.

Nothing can be done about the giant slip, and Doc says it is considering leaving it for several years to settle.

That means anyone wanting a good view of the ice now has to fly.

With two wash-outs within the past year, repaired at a cost of about $1.5million, people said yesterday the mood in the village was one of resilience.

"It's devastating but it's been such an ongoing problem,'' Westland deputy mayor Helen Lash said.

Not all visitors could afford to fly to the ice, but there was not the money to keep fixing the access road all the time.

"It's just another one of those slaps that happen - we've got to work around it. That's where the Coast comes into its own, with resilience.''

Fellow South Westland councillor Gray Eatwell said as it had happened a few times before, most people were pragmatic.

"They realise there's not an endless pit of money. All of that country is fragile - it's pretty much on the Alpine Fault,'' said Cr Eatwell, who runs tours to the Alpine Fault.

"Between that and the glacier movement over the years, no wonder it's unstable.''

The road had been shut for a week before Doc announced the closure, and it had not had a major impact on local tourism, Mr Smith said.

"We are working with Doc to see if there are options, but I think Mother Nature is going to win.''

University students had checked out the Mills Creek slip, which had moved 3m in a month. Boulders the size of a house were sitting on mud and sand.

Once they got into the valley, contractors would not be able to do anything.

West Coast Conservation Board acting chairman Keith Morfett said the board was comfortable with the department's approach.

"You can't keep throwing dollars at something.''

Doc cautioned on Friday it might have to wait until conditions in the valley settled to repair the road, which could be several years away.