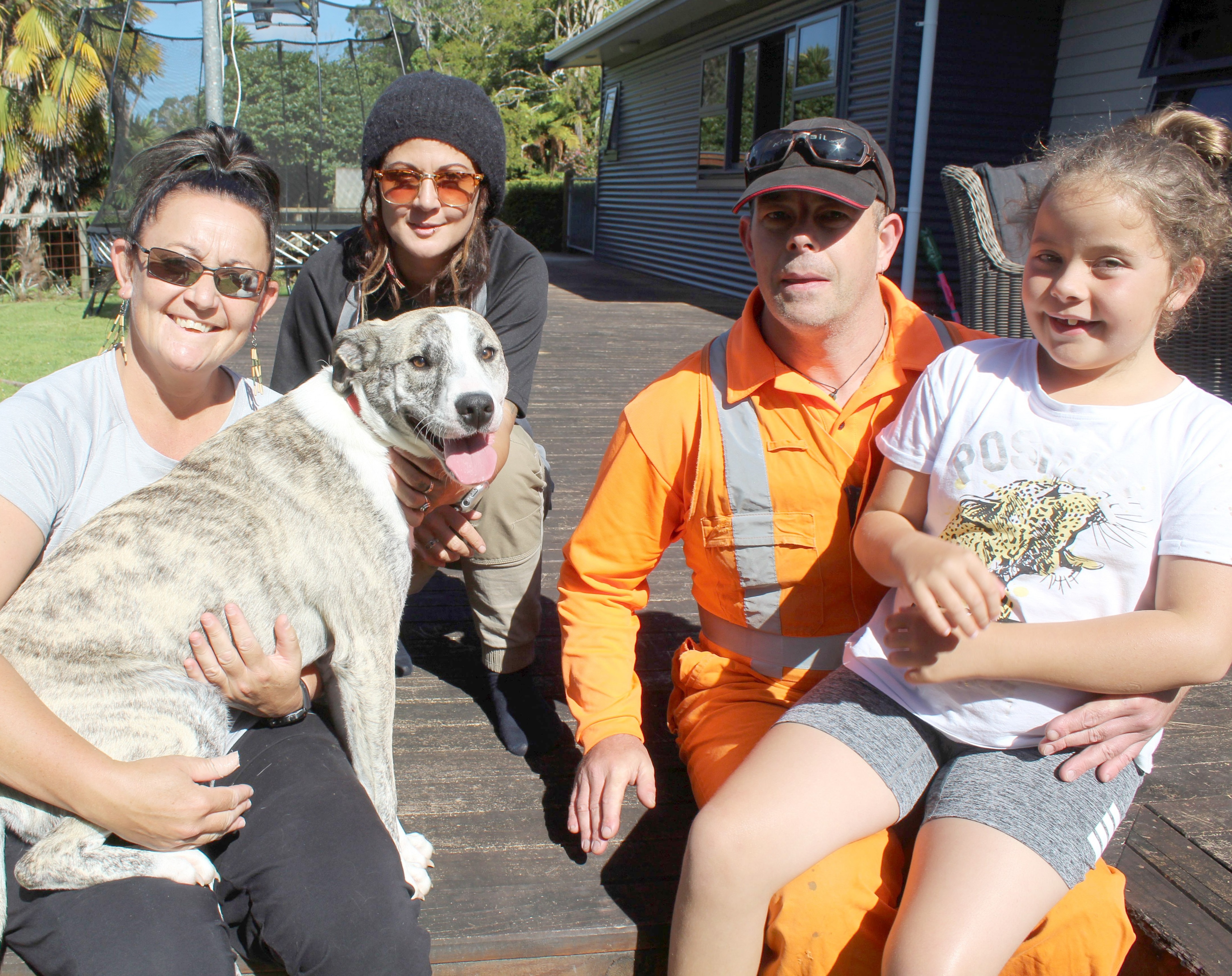 Dixie, at home in Rutherglen with adopted family (from left) Lisa Brewer, trainee locomotive engineer Dodie Joseph, and Phil and Immy Brewer. PHOTO: GREYMOUTH STAR
A twist of fate led to a happy ending for 11-month-old whippet Dixie, who was hit by a 545-tonne locomotive on the Kokiri rail line near Greymouth - and was then adopted by the train driver.

KiwiRail driver Phil Brewer said the chain of events which ended with his family adopting the dog was quite remarkable.

"Sometimes things are meant to be," he said.

Mr Brewer and trainee locomotive engineer Dodie Joseph were bringing an empty coal train back from Arthur’s Pass for a crew change at Kokiri when the accident happened.

Ms Joseph, who is the only female KiwiRail driver on the West Coast, was driving the DXC locomotive at the time.

"We came over the Stratford Rd crossing... when we saw what looked like two goats in the distance on the track.

"I put the brake on and sounded the horn and as we got closer we realised they were two young dogs. They were brother and sister and started running down the track in front."

Mr Brewer said one dog veered off the track but the other (Dixie) cowered on the left-hand side, looking up at the coming train.

"There was a distinct ‘boff’ and when I looked out the window I didn’t see her," he said.

"I assumed she had gone under, but because we were just three minutes from the crew change we carried on.

"We went back after and knocked on the doors of a couple of houses. One person said his brother had pig dogs and the owners turned up and we walked down the bank looking for blood, but there was nothing at all.

"Next minute this dog appeared from out of the bush and ran away from us."

Mr Brewer and Ms Joseph were later back at Kokiri when the owners of the young dog they had hit drove past. They said a vet had checked her out and she was as "good as gold".

"The owners said they were going to re-home her as she wasn’t a pig dog."

The young dog, then known as Smokie, was still frightened weeks after the experience, and eventually went out to Their Voice Rescue Centre at Runanga.

The Brewer family had recently lost their 15-year-old Huntaway cross, so arranged a play date with the young whippet with a view to adopting her.

They decided to change her name to something associated with what had happened, so called her Dixie, as the locomotive was a DXC, Mr Brewer said.

"Dixie has settled in and is part of the family. She is a wonderful dog and we all love her to bits."