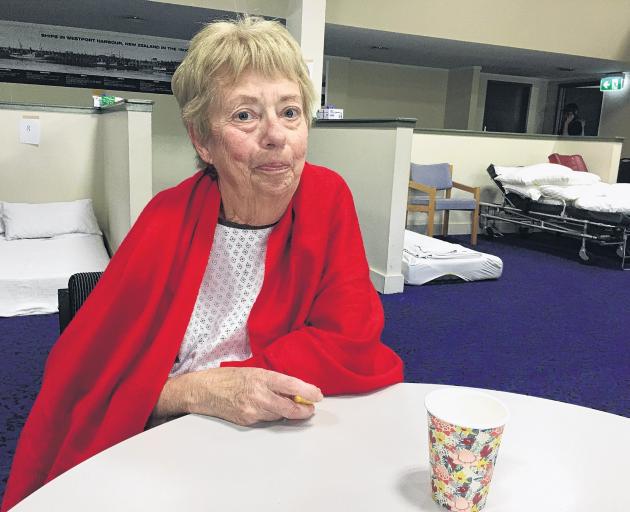 Buller Health patient Sue Wilson was evacuated on Saturday from the hospital to a temporary ward set up at Club Buller. She said she found it very stressful, especially being unwell, but hospital staff had been wonderful. Her Cobden St home had been flooded inside so she would probably have to return to family in the North Island. PHOTO: ROSE O’CONNOR
Buller Health in Westport remains closed and will probably stay closed for at least a week due to floodwater damaging the boilerhouse and getting into the tunnels under the former Buller Hospital.

The boilerhouse provides the energy to heat the facility and is also the source of hot water for the health centre.

An emergency operations centre has been set up within Buller Health where some portable heaters can be used.

The health centre itself did not appear to be too badly damaged, West Coast District Health Board incident controller Philip Wheble said.

"It’s expected the grounds are going to require a significant cleanup once the water recedes."

The DHB hopes to be back up and running at Buller Health from next Monday, although that depended on how fast it could dry out and carry out the essential repairs in the boilerhouse.

In the meantime, a temporary medical ward has been set up in Club Buller in Queen St and will operate this week.

Some of the patients who spent Saturday night in Club Buller had since been safely transferred to Te Nikau Hospital in Greymouth by St John Ambulance by road. Others travelled by helicopter, depending on their condition. One person had been discharged home.

The Greymouth aerodrome was temporarily closed to planes on Saturday night because of flooding on the runway.

On Saturday night, three patients were in the makeshift ward. Additional staff had arrived from Greymouth to relieve the local team who were able to rest and see how their homes had fared.

Some hospital beds were transported by army Unimog to the temporary Club Buller health facility for use by the seriously ill patients who were more comfortable in an adjustable bed rather than a mattress on the floor.

All Covid-19 vaccinations have been cancelled this week in Westport.

The Meals on Wheels team was calling recipients to check whether meals were still needed this week, as many people moved in with