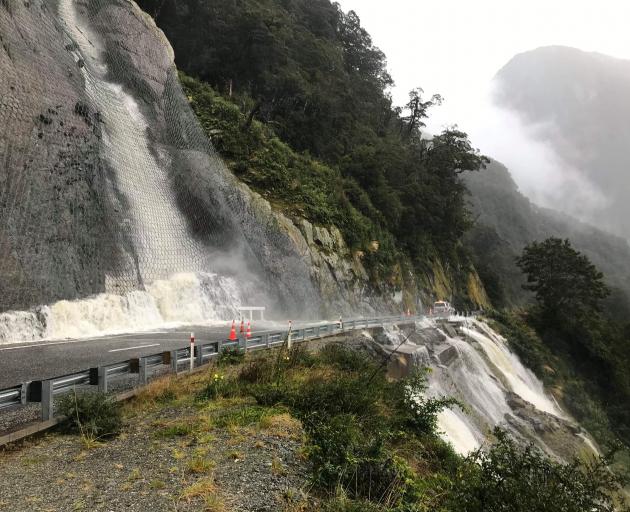 Heavy rains have caused a washout in the Diana Falls area of State Highway 6, the Haast Pass. Photos: NZTA
State Highway 6 at Diana Falls has reopened to one lane this morning after a ''washout'' there closed the road, adding to the West Coast's transport problems.

The road between Makarora and Haast was closed yesterday after heavy rain, but was now under stop/go traffic management.

The New Zealand Transport Agency advised travellers that delays were expected and to take care while driving in the area.

An NZTA spokeswoman said a ''catch fence'' had done its job during the recent deluge on March 26, although it now needed to be emptied so it worked as designed. 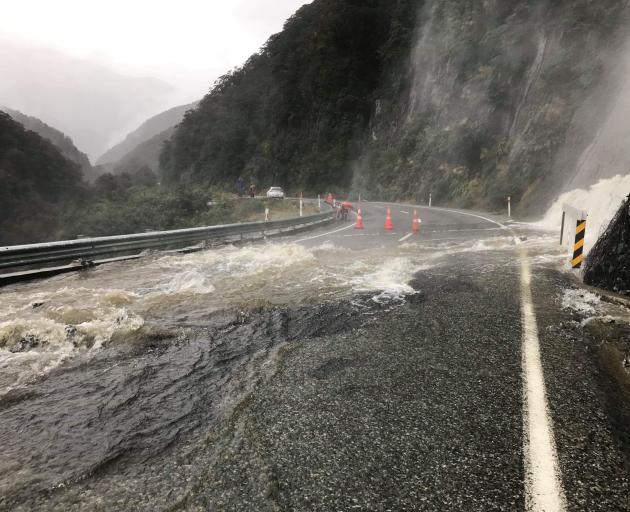 A smaller slip nearby was believed to have contributed to the deaths of two Canadian tourists whose camper van was found in the Haast River.

The highway was closed for 11 days on that occasion and then at night for more than a year, causing economic hardship for towns from Hokitika to Wanaka, as tourists were forced to take another route.

Further up the road, the West Coast Regional Council ended the deadlock over the south side of the Waiho (Waiau) River, agreeing to urgently rebuild a wall damaged in recent floods.

With no hint of government funding to relocate 80 or so residents south of the Waiho, the council agreed to immediately begin rebuilding the wall that was 80% destroyed by the March 26 flood.

Councillors backed a motion from Cr Birchfield to advance $250,000 immediately from the catastrophe fund, claim insurance and hire equipment on site.

A small delegation from Franz Josef travelled to the council meeting in Greymouth on Tuesday.

Chief executive Mike Meehan said the Waiho rating district had $100,000 in the bank, and it would claim insurance for the damaged stopbank.

Initial costings put the repairs at $2.6 million, with $3.7 million to extend it to Rata Knoll.

Mr Meehan said it was ''clear'' the Government would not be putting in compensation money to relocate landowners.

Rebuilding the wall would take about 13 weeks. Rock may be extracted from part of the Waiho Loop, which is road reserve.