Rugby: Moala may play against Crusaders 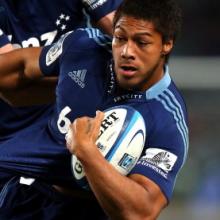 The 22-year-old appeared at the Auckland District Court alongside his older brother Siua this morning. They are yet to enter a plea to their charges of injuring with intent to injure.

The pair were arrested in relation to an attack on Auckland's Karangahape Rd in the early hours of December 30 which left a man in a drug induced coma and with serious cuts to his neck.

The Moala brothers had been granted interim name suppression but that lapsed today and their lawyers did not seek to extend it.

They are due back in court next month.

Moala was cleared to play for the Blues in their win against the Melbourne Rebels last weekend.

A spokesman said the Blues' team to play the Crusaders this weekend will not be named until Thursday but Moala will be available for selection.

The New Zealand Rugby Union (NZRU) said Moala will face a misconduct process once his criminal charge has been dealt with.

"When a player finds himself facing charges of this nature we treat it seriously but it's important that we do not pre-judge his right to a fair judicial process. It is a complex matter which is in the hands of George's lawyers and we are not able to comment further at this stage," said professional rugby manager Neil Sorensen.

"That issue was dealt with three weeks ago by the team. He is now expected to turn up to work and fulfil his obligations as any other member of the squad," Dalton said.

National Network of Stopping Violence manager Parekotuku Moore said she would like to see the New Zealand Rugby Union clarify its stance on violence.

She said it was unclear what the Union's code of behaviour was.

"Clearly, the NZRU seem not to have such policies and appear to be responding to situations as they arise."

She said the Union needed to send clear messages to its people if it wanted to change behaviour.

All Black and Hurricanes' player Julian Savea appeared in the Wellington District Court last month charged with assaulting his partner.

Savea, who fronted the "It's not OK" anti-domestic violence campaign last year, made a tearful public apology to his partner and his family.

Moala's teammate, midfielder Francis Saili appeared in Manukau District Court earlier this month and pleaded guilty to driving while suspended. He is applying for a discharge without conviction.

The move came after players' union boss Rob Nichol suggested rugby professionals were predisposed to suffering behavioural and mental challenges because of factors such as performance and selection anxiety, loneliness, relationship stress, substance abuse, stress and a lack of social support.