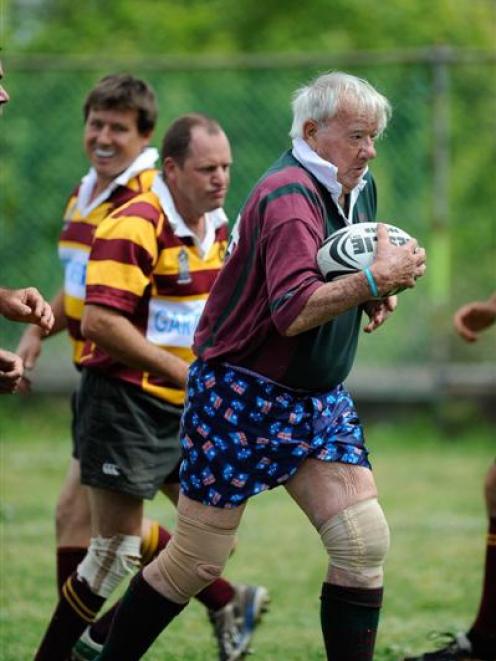 Rugby veteran Arthur Pacey, who will be a player to watch at the Golden Oldies festival in Oamaru this weekend.
There was a time when Arthur Pacey lived up to his name by racing up and down rugby fields all over the South Island.

That time was the 1940s, when the former winger played schoolboy rugby in Kaikoura, Parnassus and Oaro, and senior rugby for various Air Force teams after joining the service in 1944.

In 1947, aged 22, he moved to Picton and played for Waitoha, Marlborough Maori and Marlborough, before joining K-Force and heading to Korea, where he played for Easy Troop, 163 Battery and the 16 Field Regiment.

Age might have slowed him; converting him in to a front-row forward, but that is unlikely to stop him from causing havoc for the Marlborough Vintage Musseleers at the Waitaki Golden Oldies Rugby Festival in Oamaru beginning tomorrow.

In fact, the oldest player registered for the tournament, who played his final game of competition rugby for Moutere against Kaikoura in 1993 aged 69, is unlikely to have a hand laid on him.

The prop will don distinctive shorts - which signify he is not to tackle or be tackled - and will again glide past helpless defenders left confounded in his wake.

The 86-year-old is looking forward to the tournament, but admits he is not as fleet of foot as he once was.

He normally only runs 20m or so before off-loading to a teammate bursting off his shoulder.

"I'm getting that slow my cat will be past me soon.

"If [the opposition] had any brains they'd let me run 100m and that would be the end of me.

Mr Pacey is just one of 700 confirmed visitors from a total of 18 teams that have confirmed that they will attend the weekend festivities at Oamaru's Centennial Park.

The weekend will feature a gala dinner hosted by Commonwealth Games gold-medal winner Dick Tayler and featuring former All Blacks, Grant Batty and Ian Kirkpatrick, as guest speakers plus a music festival including the Feelers, the Beat Girls and the Black Velvet Irish Band.

A campervan village will be set up alongside the field of playat Centennial Park.

The ticket price of $125 for players and $110 for partners includes breakfast on Saturday and entry to the Friday night music festival, entry to the World XV versus Waitaki Invitational XV game on Sunday and entry for "Spot Festival Prizes".

Players who are not with a team are welcome, and will be placed into one of the "Waitaki Barbarian Teams" or another team running short of numbers.

Entry is free for locals wanting to watch the games.

• Players will attend from England, Netherlands, Belgium, Australia and possibly the United States.

Rules
There are many and they are varied.

Before a match the referee and captains decide on how the rules will be applied. Many "local variations" exist, such as short lineouts and long scrums. As such, the rules below are general Golden Oldies rules.

Red shorts: Player can be claimed and held but not taken to the ground in a tackle.

Gold shorts: Not to be tackled or touched, or tackle other players May run 15m with the ball before off-loading to a team-mate wearing red or club shorts.

Purple shorts: Not to be tackled or touched, or tackle other players. May run 15m with the ball before off-loading to a team-mate wearing red or club shorts.

Special Committee shorts: Not to be tackled or touched, or tackle other players. May run 15m with the ball before off-loading to a team-mate wearing red or club shorts.

• Uncontested scrums, no quick lineouts or lifting in the lineouts, no quick taps, no kicks in general play outside own 22, try-scoring team kicks off to restart play, rolling substitutions, no cleaning out of rucks.

• Games to be played in three 20-minute periods.