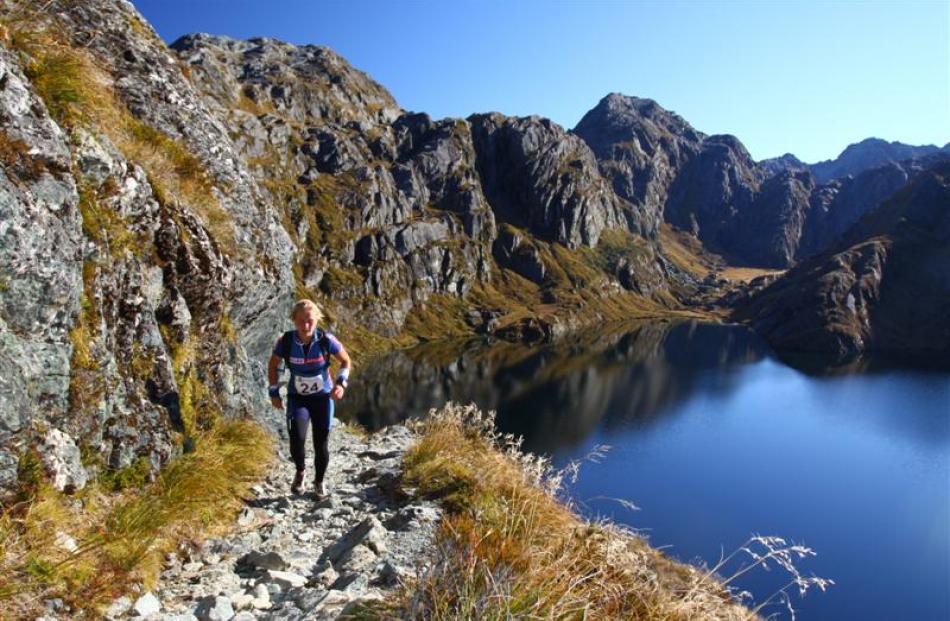 Whitney Dagg, of Dunedin, traverses the Harris Saddle during the annual Routeburn Classic on Saturday. Photo by MMPRO PHOTOGRAPHY.

Bevan Stevens capitalised on perfect conditions to break a long-standing record in the Routeburn Classic on Saturday.

The former New Zealand junior enjoyed the sun on his back and finished the rugged 32km course in 2hr 49min 37sec, more than 2min inside Ussher's mark.

Nearly 330 runners took part in the tough adventure race, which started at the Divide on Milford Rd, crossed the Fiordland National Park, over the 1127m Harris Saddle, and finished in the Mt Aspiring National Park near Glenorchy.

Organiser Evan McWhirter said the day was "magnificent" and the course "majestic".

"The track was in prime condition, clear, dry and fast. We enjoyed clear blue skies with not a breath of wind. It was absolutely stunning and I think the best conditions we've ever had for this race."

The results were testament to the amazing conditions, he said.

McWhirter made special mention of Crane, who returned after winning the women's title in 2009 and having her first baby on the day of last year's event.