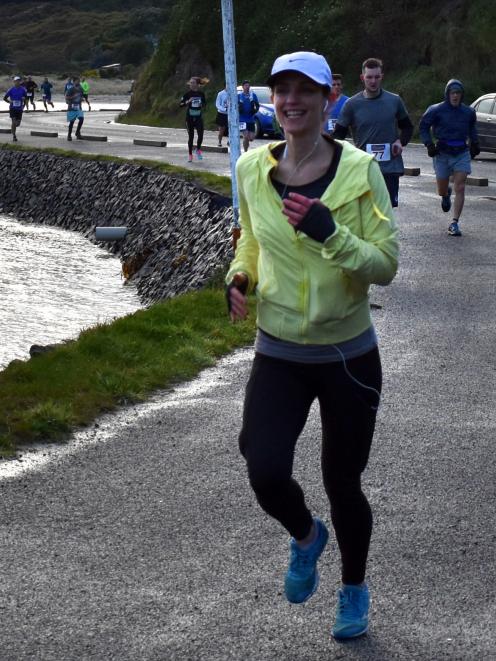 Jamie Marra running in yesterday’s Dunedin marathon for Unicef’s Children in Conflict. Photo: Wayne Parsons.
She may not have the fame associated with her sister, but second year University of Otago  School of Dentistry student Jamie Marra was one of the many features on yesterday’s marathon course.

Marra (34) arrived from British Columbia, Canada, early last year to begin her dentistry studies, becoming one of the many recreational runners around Dunedin’s North end. Her sister, Alexandra (Allie) Thomas, is a former model for Canadian athletic apparel retailer Lululemon. Marra organised a group of students and staff from the University of Otago’s School of Dentistry to run one of the three course options yesterday to raise funds and awareness for Unicef’s Children in Conflict.

A regular jogger, Marra had only contested one marathon before yesterday, completing the British Columbian BMO Marathon event in 4hr 3min. She clocked a similar time yesterday of 4hr 3min 12sec.

"My sister [Allie] is quite an athlete, so I’ve done lots of running with her over that distance I’m sure," she said.

Since coming to Dunedin, Marra said she has done lots of running, averaging between 40km and 50km a week. But as part of her build up to yesterday’s marathon, this blew out to around 70km.

On one occasion she split a 50km run by doing 25km in the morning and 25km in the evening. But more often she averaged between 15km and 18km on her runs.

Marra quipped that one of her goals could be to do the demanding 250km Gobi Desert Ultramarathon.

With an extensive background as a player and coach of volleyball, Marra’s first love is running and the challenge each run can presents.

As a passionate advocate of Unicef, she decided to combine the two for yesterday’s marathon run.

"Unicef is an amazing organisation," she said.

"A lot of people feel frustrated when people give money to charities, because they don’t know what it is used for. But Unicef has such infrastructure and resources available that they can actually reach that need and provide help such as food and water, family reunification and all kinds of suff for kids that are affected by violence and poverty and all sorts of situations. I just feel very passionate about this."

Before the start yesterday Marra estimated that collectively the group of runners she helped organise had raised between $400 and $500.

Another group, mainly from the University of Otago School of Dentistry, pledged about $5000  for Suicide Awareness.