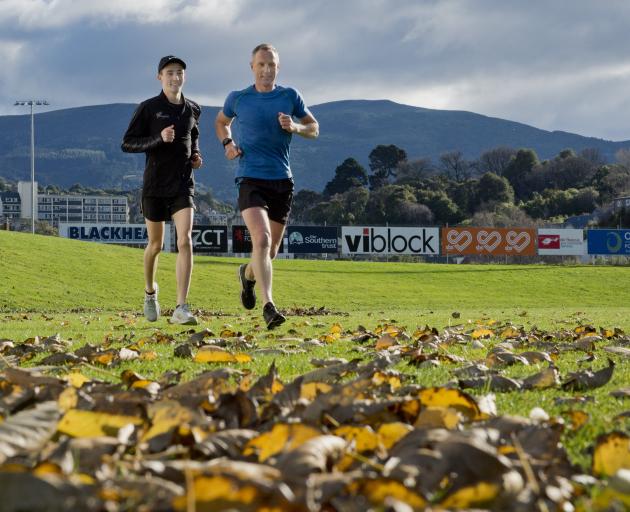 Oli Chignell (left) and Richard Fogerty check out the conditions yesterday before the Lovelock relays at the University of Otago Oval today. PHOTO: GERARD O’BRIEN
It will be a little wet underfoot and a little later in the year than normal.

But that has not detracted from the popularity of this year’s Lovelock Relays to be held today at the University Oval.

The annual event, honouring Jack Lovelock’s 1500m gold medal at the 1936 Berlin Olympics, has attracted 48 teams across its various grades.

It consists of four or six-person relay teams, depending on the grade. Each competitor runs 1500m.

The relay is the first major event on the Athletics Otago calendar following the Covid-19 lockdown.

Organiser Oliver O’Sullivan said that while the event had to be postponed, it was important to hold it, particularly to continue its run of what will be 84 consecutive years.

"Obviously we had to change when the Lovelocks was," O’Sullivan said.

"But it’s been a pretty iconic event for a lot of local runners, so it’s one people have wanted us to retain."

O’Sullivan said while the track may be a little damp, it would be the same for all teams.

The times may be 5sec slower per person, he predicted.

The feature races, the senior women’s and senior men’s, start at 2.55pm and 3.20pm respectively.

There is plenty of quality in the senior men’s race, in particular.

Defending champion Hill City-University has put together the strongest team to contest the race in several years.

It is headed by Olympic hopefuls Oli Chignell and Caden Shields, while in O’Sullivan, Logan Slee, Kirk Madgwick and Russell Greene it has four other exceptionally classy runners.

Leith may be its toughest competitor.

It brings quality in the Staufenberg brothers, Julius and Janus, as well as Nathan Hill and Nic Bathgate.

Caversham also has quality in Jonah Smith and Nathan Shanks, while Ariki has a notable name in Xavier Walker.

Injuries have weakened the senior women’s field, a race in which there is no clear favourite.

Laura Bungard is the only returner in the defending champion HCU team.

She is joined by another notable name in captain Bella Bloomfield.