Running way people can take control of their health 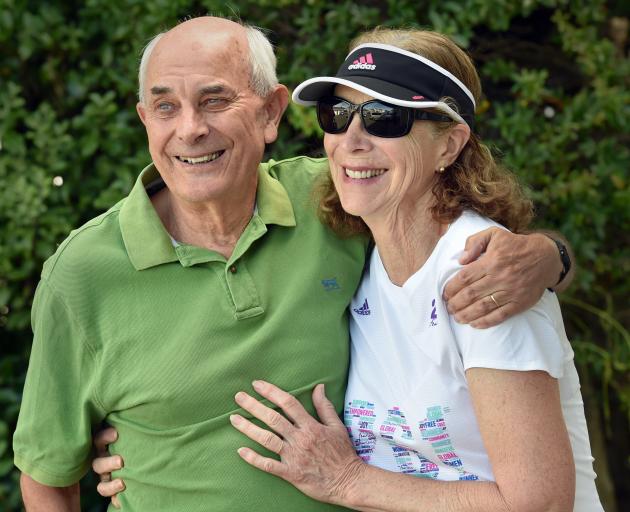 Roger Robinson and wife Kathrine Switzer in Dunedin yesterday. PHOTO: PETER MCINTOSH
Roger Robinson is showing no sign of slowing down - even though he needs two knees named Mark and Russell to help him out.

Robinson (79) is a runner, scholar and author but not necessarily in that order. Robinson, along with his wife, trailblazing marathon runner Kathrine Switzer, were in Dunedin yesterday visiting family.

Robinson has just finished his sixth book on running, and has written nearly two dozen books on various topics over the years.

He still loves running and all of athletics, starting from when he saw Czechoslovakian runner Emil Zatopek win Olympic gold in London in 1948.

"That sparked it for me really ... it is completely different now but it is still the same. It was a much bigger spectator sport back then but team sports have taken over now,'' he said.

"But it is a huge participation sport, you go around and meet all these nice people. We went down to the park run here at the Gardens on Saturday and there was something like 250 people there. They would not regard themselves as serious runners but they love it.

"When we were running to start with we were seen as eccentric guys. No good at football so did running - all a bit strange. But now everyone is doing it, including women.''

He said running had the advantage of people being able to take control of their own health.

"People feel better about themselves. Plus it's a mix of individual and a team thing. You can go out for a run at four in the morning or at midnight and nothing can stop you. Or you can go running with friends at an agreed time.''

He said athletics like many traditional sports was losing its popularity as there were simply more things to do.

"You look at the park runs which have become so popular. They have a loose structure which really works for a lot of people. But New Zealand athletics is still strong in high performance.''

An emeritus professor of English at Victoria University in Wellington, Robinson has just published When running made history, a history of running mixed in with his own experiences and thoughts.

He said New Zealand was always going to find it tough in distance racing as East Africans had the natural advantage of living at altitude all their lives and being able to process oxygen faster. But New Zealand did well in other events.

He was not a fan of records, saying there was too much focus on them, and they put athletes off competing.

"I love a race, a good tactical race. If you watch a good race then you have no idea how fast a race was.''

Switzer (72) is still a keen runner and lines up in marathons.

She was a trailblazer for women's running, competing in the Boston Marathon in 1967, before women were allowed in the event.

His book will be launched in Dunedin on Thursday when former Commonwealth Games champion Dick Tayler will speak.