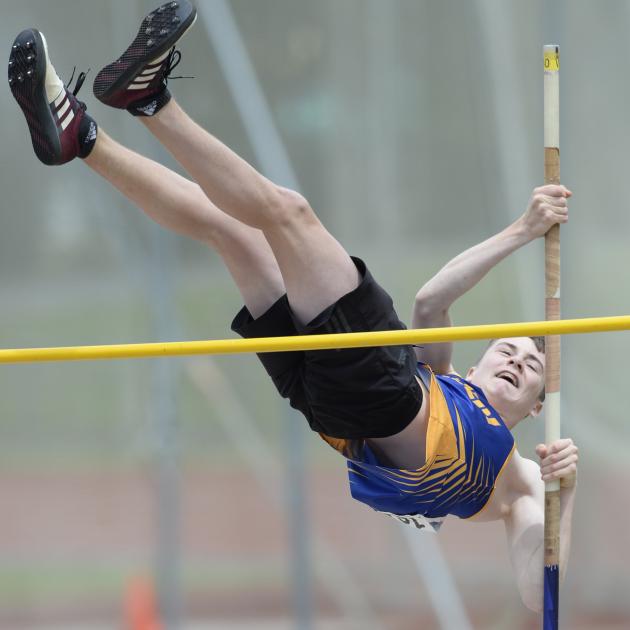 Taieri athlete Cole Gibbons clears the bar in the open pole vault at the Caledonian Ground on Saturday. Gibbons won the grade. PHOTO: GERARD O’BRIEN
Oli Chignell has broken his second record of the summer.

He ran 7min 59.34sec at the Potts Classic in Hastings, a race which doubled as the national championships.

It left him 0.06sec ahead of the record former Olympian Dick Tayler set 50 years ago.

Chignell finished sixth in what was a fast-paced race.

Chignell was part of a group of seven who separated themselves from the field early.

They remained close before Tanner kicked in the final lap, forcing the pace and proving too much to keep up with.

The record goes with the new 5000m mark Chignell broke before Christmas.

Meanwhile, Rebekah Greene, also of Hill City-University, ran her fastest 800m since 2014 in an impressive display. Her time of 2min 07.73sec took her to victory in a strong field.

She led at the halfway mark, before accelerating away down the back straight.

No1 ranked New Zealander in the event, Katherine Camp, attempted to close the gap over the last 200m, but Greene showed great strength to hold off the Canterbury runner.

At the Caledonian Ground on Saturday, at an Athletics Otago meeting, Christchurch Old Boys’ Dylan Forde ran 4min 01.12sec to edge HCU’s Jared Monk by just over a second in the 1500m.