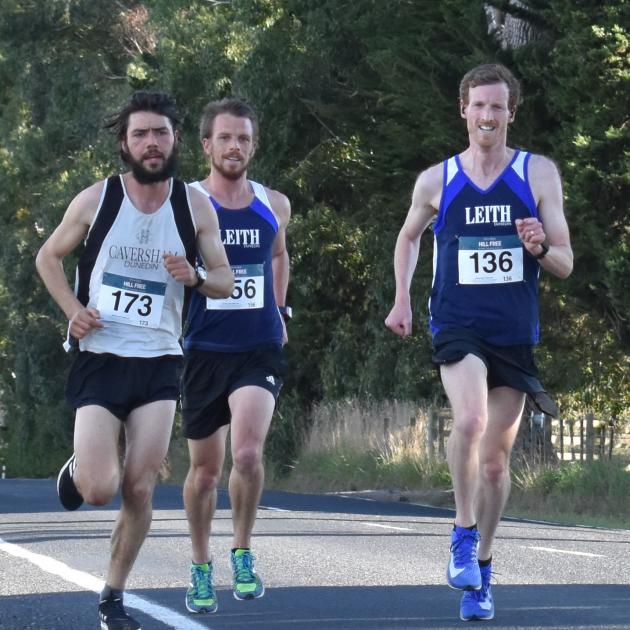 Jonah Smith (left), Jason Palmer (centre) and defending champion Nic Bathgate pull away from the field in the opening stages of the Hill Free Half Marathon yesterday. PHOTO: WAYNE PARSONS
The Otago marathon and half marathon title double has proved elusive for many but yesterday Jonah Smith (Caversham) completed the task when he won the annual Hill Free Half Marathon at Outram.

Seven weeks ago, the 24-year-old dairy farm worker was involved in an epic battle to win the Dunedin Marathon and along with it the Otago senior men's marathon crown.

He backed that up yesterday.

"It feels pretty good," Smith said of completing the double.

"I've won both events before, but never in the same year. So that's quite cool. And I had some pretty solid competition in both events, making them pretty good races to win."

Smith got involved early in yesterday's half marathon, breaking away from the field with the Leith pairing of Jason Palmer and defending champion Nic Bathgate.

Although happy with the pace and company of Palmer and Bathgate, Smith found himself easing into overdrive as he gradually pulled way from the pair just before the 5km mark.

"I went through 5km in 17min and I was feeling good so I just kept it going.

"It's a nice, flat road out there, so it's quite easy to keep your pace going."

Smith held his pace through to the 10km mark, when he said his legs started to feel a bit heavy.

Although slowing his pace, it was the thought of Bathgate and Palmer coming back at him that spurred him on.

"I was running mentally, thinking someone else was there. So I just had to gun it."

"I haven't been able to get a whole lot of training in. I've been doing a little bit of training. But not much. A bit of tempo and fartlek work. But it got me through this and I'm happy."

Just seven days earlier, Laura Lincoln finished the Melbourne Marathon in 3hr 18min 46sec, 11th in the women's 25-29 age group. As part of her recovery the 29-year-old speech pathologist boarded a plane to stay with friends in Dunedin, and opted to run yesterday's half marathon.

New Zealand mountain running representative Sophie Smith opened up a sizeable lead in the first half of the race but Lincoln came through to win by the narrowest of margins over Dunedin's Julie Edmond. Lincoln clocked 1hr 33min 1sec and Edmond stopped the clock a second later.

Despite building up what appeared to be an unassailable lead over the first 15km, Smith, a third-year pharmaceutical student, was affected by the heat and exam fatigue, but held on grimly to finish fourth in the open women's section in 1hr 36min 6sec.

It was a double of sorts for Oliver O'Sullivan (Hill City-University), when he won the associated 10km event in 33min 10sec. O'Sullivan also won the 10km section of the Dunedin marathon last month. Megan Foster won the 10km women's section in a time of 42min 25sec.

A feature of the event yesterday was the entries from members of the Achilles International New Zealand Dunedin branch. Handcyclists Mia O'Keefe and Hannah Scott, blind athletes Aerangaroa Rouvi and Michael Bardwick featured along with fellow athlete Dwane Sheddan.