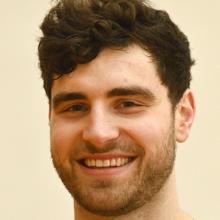 Sam Timmins
Sam Timmins is not the lanky teenager he was in 2014 when the Nuggets last registered a win at home.

These days he has shoulders like Charles Atlas and they helped carry the Nuggets to a 93-66 win against the Taranaki Mountainairs at the Edgar Centre on Saturday night.

The 23-year-old muscled his way to the hoop for 22 points and grabbed 12 rebounds in a dominant performance in the paint.

He also dished five assists, made three blocks and let out one very scary roar — kid you not.

The other notable performance came from American Isaiah Moss. He eased his way to 28 points and looks a classy player.

Everyone chipped in, really. It was a wonderful team effort and almost worth the wait for a crowd of 1400 there to witness the fixture.

The Nuggets dropped out of the league at the end of the 2014 season. They returned last year but the entire league was played in Auckland, so fans have had to wait seven long years for Saturday's home victory.

The win has also helped put some air back in the tyres after the Nuggets were rolled a little too easily against the Wellington Saints in the season-opener in Dunedin last weekend, coach Brent Matehaere said.

"Last week we wanted everything to go well but were probably a little bit tentative at times," he said.

"I think we played within ourselves but that did not happen [Saturday night].

"The guys came out and worked really hard on defence and offence. We are only just starting to see how good Isaiah is and that was a big double-double by Sammy.

"We really had a hard look at ourselves last week and the guys showed some mana."

Taranaki started hot and all the key players featured.

Guard Francis Mulvihill hit a three-pointer. Tai Wynyard got a hook shot over the top of Timmins and Marcel Jones landed a three pointer.

But that was pretty much the highlight for the visiting side.

Moss took over with 11 points in the quarter to help the Nuggets open up a 21-19 lead at the first break.

Timmins had a monster second period. He hauled in seven rebounds and scored 11 points.

But the Nuggets really busted the game open in the third quarter.

They outscored their opponent 28-14 to build an unassailable 70-45 lead with 10 minutes remaining.

There was a lot to like about the performance but one play really sticks out.

Rodger made a steal midcourt and dashed off to make an easy lay-up. Then he was the first back down the other end in a desperate effort to defend the hoop.

The look on his face when the ball dropped through the basket despite his effort said it all. You want those guys in your team.

And if the Nuggets continue to show that kind of commitment, they will not have to wait long for the next home win.