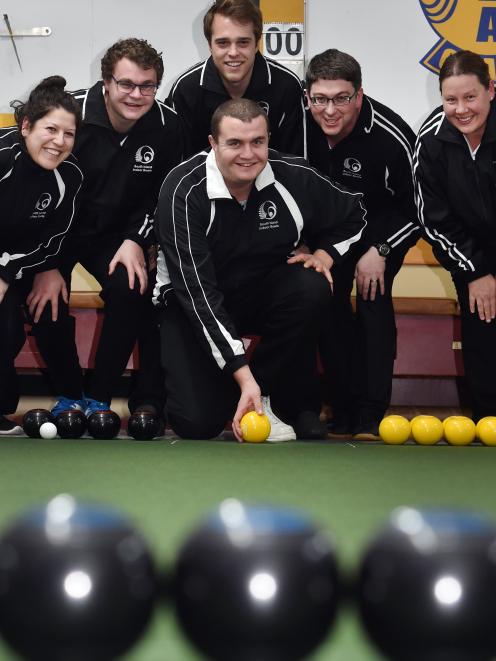 South Island representatives (from left) Keri Te Tamiki, Nic Sinclair, Brandon Williams, David Webb, Tracey van Tuel and, in front, Daniel Sinclair at the Dunedin indoor bowls centre this week. PHOTO: PETER MCINTOSH
The selection of six players from Otago in the 20-strong South Island squad to tour the North Island in early August is a fair reflection of the growing strength of indoor bowls in the region.

What is more significant is that the average age of the six players is 30, countering the image of a sport for those of a more senior age.

Daniel Sinclair (29), who has been selected to represent the South Island for the fourth time, is joined by Brandon Williams (24), Keri Te Tamaki (29) and first-time selections Nic Sinclair (24), David Webb (39) and Tracey van Tuel (37).

"It's a record number of Otago players. It's pretty special," Sinclair said.

The team plays its first session of three games in Whangarei next Friday and will then play in venues around the North Island.

The tour will culminate in the interisland test in Pukekohe on August 10.

The North Island has held the shield for the past 17 years and the South Island team is keen to get it back.

The is squad made up of 10 men and 10 women and they will each be split to play singles, pairs, triples and fours.

Despite team-building baptisms the three first-time selections face on tour, all are excited to have been selected in the team.

Webb said that last weekend's Otago victory in the inter-centre Paterson Trophy in Invercargill involving teams from Timaru south, was a good indicator of the South Island form heading north next week.

"We smashed them, really," he said of Otago's dominance in Invercargill

Five of the Otago contingent in the South Island team - Daniel and Nic Sinclair, Webb, Williams and Te Tamaki - were members of the Otago eight-member team that won the Paterson Trophy last weekend.

The other members of the team were Hugh Bosman, Ray Webster and New Zealand representative Daniel French.

French, Williams and Te Tamaki all finished all tied on 13 points for player of the tournament honours, Te Tamaki winning the silverware on countback by two ends.