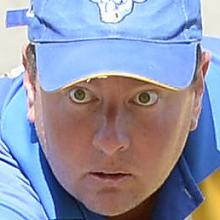 Rice (38) won a tight first-round game against Jamie Hill (Counties) 25-22 because of the accuracy of his draw shots.

"The first bowl is the key," Rice said.

"It got me out of trouble countless times today."

Rice had the uncanny knack of draping his early bowls around the jack and this kept the pressure on Hill on the North East Valley green.

He did not use the drive a lot but made effective use of it when it was needed.

On the 10th end, he was two shots down on the head when he drove out Hill’s bowls and gained two shots.Hill was up 11-6 and looked likely to take control of the game if he had kept those two shots.

It was the start of a run of three ends when Rice scored four shots to be just one shot behind after 12 ends.

The game was at 14-14 after 17 ends when Rice had a run of four ends that netted him nine shots and a six-point lead.

"Nathan was more consistent toward the end and got the line better than me," Hill said.

Rice has played 240 tests for Australia in the past 15 years. He won a silver medal in the fours at World Bowls in Christchurch in 2008 and a bronze medal in the pairs.

Rice won a cliffhanger in the second round when he beat former New Zealand international Justin Goodwin (Auckland) 25-24.

Canadian international Ryan Bester was looking at a big loss against Bob McAuley (South Otago) when he trailed 15-5 after 11 ends.He then bombarded McAuley with a series of drives and up shots to bring himself back into the game.

It was a high-powered attack on the scoring bowls around the head and it worked.

There remained a five-point gap when McAuley held a 20-15 advantage. But that was where his scoring ended as Bester scored 10 unanswered points to win.

Bester beat Bill Clements (Alexandra) 25-19 in the second round.