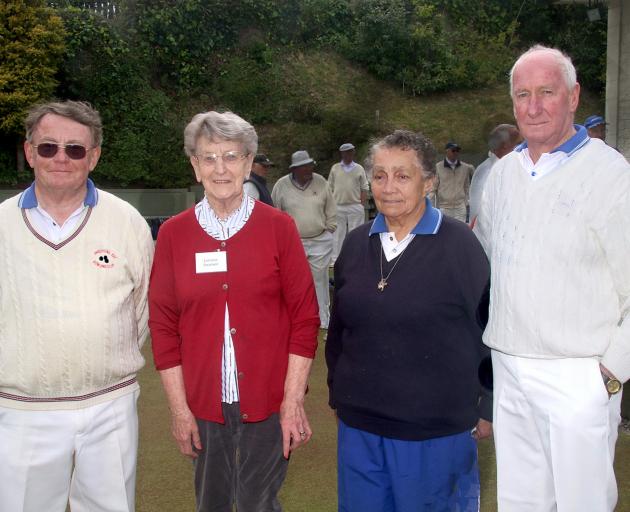 Swanson (87), the oldest member attending the celebrations, received the plaque ''for giving outstanding voluntary service to the club over the last 38 years''.

Swanson worked in six major areas and played a key role in the smooth transition into one club when the separate men's and women's clubs were amalgamated in 1999.

President Bob Warren highlighted Swanson's work as a coach and selector and her work on the catering committee.

The highlight of her coaching career was to mentor and play with Gaynor Reid, who won a record 24 Bowls Dunedin women's titles before shifting to Nelson in 2001.

Reid, who represented New Zealand at the world champion of champions singles in Guernsey in 1996, returned to Dunedin for the centennial celebrations and dubbed Swanson the ''Mother Duck'' of the bowlers she coached.

''Bowls has been my passion and the sport and the Andersons Bay club has filled a great hole in my life after my husband died 28 years ago,'' she said.

''The sport has given me something to do on a Saturday. I like the competition and enjoy the camaraderie and having a few beers with my mates,'' he said.

Thompson (73) joined in 1980 and was one of eight recipients of a centenary gold star for winning 10 or more club titles.

''I enjoy doing jobs around the club with my mates,'' he said.

McLelland (79) emigrated from Tonga in 1960 and was awarded the QSM. She joined the club 29 years ago and has won 33 club and eight Bowls Dunedin titles.

The three-day centennial celebrations were attended by 87 past and present club members. The guest speakers were chief executive of the New Zealand Sports Hall of Fame Ron Palenski and World Bowls champion Mike Kernaghan.

The centennial fours tournament was won by the Mornington team of Bruce Abbot, Alan Anderson, Willi Simmonson and Paul Rennie.