Bates stoical about stint on sideline 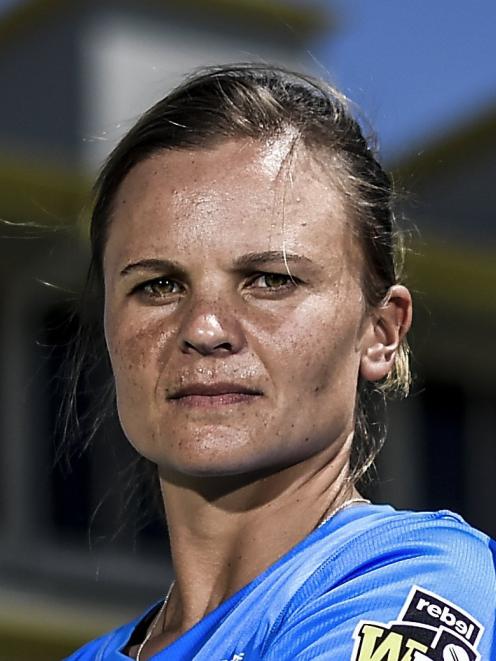 The White Ferns and Otago Sparks all-rounder is closing in on a month since she had surgery on her right shoulder.

She injured it during a Big Bash game in Australia and had surgery in Christchurch on December 17.

The 33-year-old is stuck in a sling for the best part of another three weeks and cannot drive or even tie her hair up.

Super Suzie is now Sideline Suzie. Her rehabilitation is expected to take six to nine months.

The first week post-surgery was rough. She was in pain but three weeks on she is able to move around more.

"It is getting a little bit more comfortable and I’ve been able to walk and get to the gym and do some stationary biking," she said.

"But I’m not going too crazy and obviously I’m doing a few different things like this commentary."

Bates was called in to commentate on the Sparks game against the Hinds at the University of Otago Oval yesterday.

She was able to call a good win for her side.

It is not the same as playing, though.

With Covid-19 interrupting sport last year, Bates was fresh and really looking forward to playing for her province.

But she is philosophical about the setback.

"When the injury happened, I looked back and I’ve been super lucky. When I was about 15 I broke my collarbone and I’ve had niggles but I’ve always been able to play through.

"This is the first time since I’ve played for New Zealand that I’ve missed a game through a physical injury. I was sick once.

"It is definitely different — my first summer without playing cricket since I was about 14."

She enjoyed not having to rush off to training during the Christmas period.

"But sometimes when I’m watching I really miss it. But when I completely get away from it, I quite enjoy the break.

"It is a bit up and down. But it is about being able to keep busy and just accepting that you are out for a while rather than trying to rush back."

There is talk the White Ferns will tour England in nine months and Bates wants to be on the flight if it goes ahead.

"There is also next years’ Women’s World Cup to look forward to.

"In a funny way, if you are going to get injured at any time, then during Covid is not the worst time.

"Fortunately, the World Cup was moved [from 2021]. Otherwise that would have been a big blow."