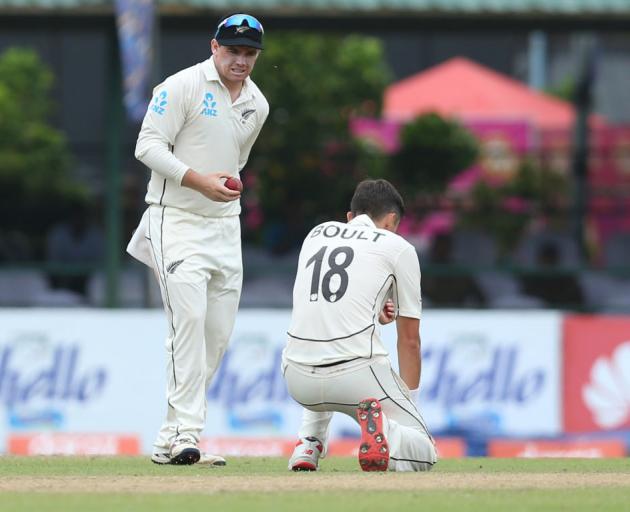 Tom Latham (left) and Trent Boult react after a dropped catch by Boult during the day two of the Second Test match between Sri Lanka and New Zealand. Photo: Getty Images

Trent Boult had a superb start to his day in the Black Caps' second test against Sri Lanka in Colombo.

Trent Boult, taker of some of the most insane, athletic catches of all time, has dropped maybe the easiest one I’ve ever seen dropped live.

How do you even drop that?#SLvNZ

New Zealand's star seamer took a double-wicket maiden in just his third over of the day, removing Angelo Mathews and Kusal Perera to put the Black Caps on top, and bringing up 250 test wickets - just the third New Zealander to reach that milestone.

However, his morning in Sri Lanka soon took a turn for the worse, after dropping one of the easiest catches in cricket history.

Boult drops the easiest catch ever

With Dhananjaya de Silva on nine, the Sri Lankan all-rounder was given the ultimate let-off.

A leading edge went straight up into the air, with Boult waving away his fielders to take what looked to be the simplest of return catches. Somehow, the ball spilled out, leaving everyone in shock — most of all, Boult — and de Silva allowed an incredibly fortuitous second chance.

How can you drop that sitter, Boult??? He is usually a very good fielder. I can't believe it. Maybe the ball has got wet? One can't explain it #SLvNZ

Boult is known for taking spectacular grabs, but has also compiled a few lowlights in the field over the last summer, having dropped several catches, and stepping on the boundary rope in the pivotal final stages of the thrilling World Cup final.

Trent Boult dropped a catch that I could have taken one-handed in my sleep. And that is saying something!#SLvNZ

However, none of those dropped chances will be as stunning as the sitter he put down in Colombo.

De Silva made the most of his incredibly fortuitous second chance to reach lunch unbeaten on 32, with Sri Lanka at 144-6.