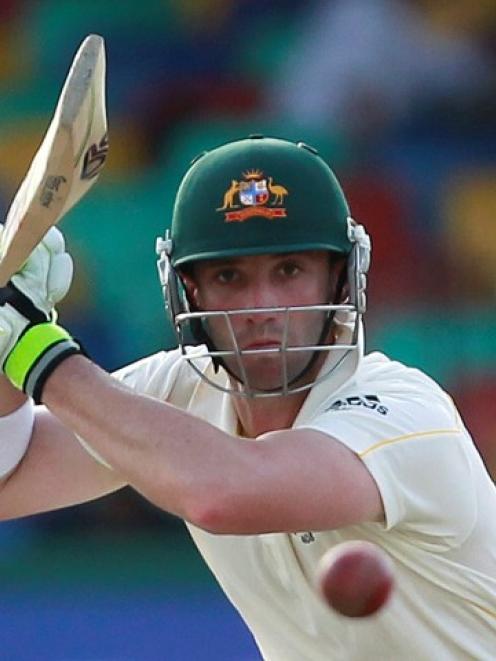 Phil Hughes
Australia's lacklustre performance against the England Lions might have answered the question of who will bat at No.3 in the fifth Test, but not with any great conviction.

Phil Hughes came out at first drop, with incumbent Usman Khawaja dropped well down the order to No.6, in a telling indication of what the latest batting change might be for Wednesday's final Ashes match at The Oval.

Hughes scratched out 30 from 92 balls in an underwhelming innings which was sadly the story of the day for the Australians in a flat two-day match at Northampton that fizzled out into a draw.

With regular wickets falling, Khawaja still had a chance to spend time in the middle, but was caught behind for four.

Coach Darren Lehmann signalled that careers were on the line after the fourth Test collapse at Chester-le-Street and Khawaja appears in the firing line with an average of 19 from his three appearances.

Lehmann and Rod Marsh picked the batting order for the two-dayer, and stand-in captain Shane Watson said he had no inside knowledge on whether Hughes at No.3 was a preview for The Oval.

"I'm the wrong person to ask that question. I'm a ring-in captain. I have absolutely no idea," said a jovial Watson.

"I know not to interpret things. It might get me into trouble."

No Australian batsman scored 50 and clumps of wickets fell to leave them reeling at 6-160 and in danger of an embarrassing loss.

However blushes were saved when an unbeaten 67-run stand between Matthew Wade (38 not out) and James Faulkner (29no) guided the tourists to within 43 runs of victory before bad light forced play to be abandoned early.

Watson top-scored with 45 and admitted Australia's struggling batsmen missed out on the confidence boost they were looking for against a second-string English side.

"We probably haven't got a hell of a lot out of this game from the batting side of things," Watson said.

"There's no doubt the wicket with the new ball provided a few challenges. So it wasn't a Test match wicket, that's for sure.

"It's hard to get a gauge of exactly where guys are at."

David Warner looked good for 35 until he missed a slashing attempted drive and was out stumped.

At least Warner and Watson looked fluent when they were out there, but incumbent batsmen Khawaja and Steve Smith (18) were ordinary and Ed Cowan (17) couldn't take his chance to push his case for re-inclusion.

Wade should have been out caught for three but he took his chance and, along with Faulkner, fought hard under pressure.

However, both are extreme long shots to play at The Oval.

Watson denied batting confidence had been eroded further by the tour match.

"I don't think so, to be honest. In the end, most guys were able to get the start of their innings done which is the most challenging part of batting really," he said.

"I don't think we should read a hell of a lot into what happened out there."