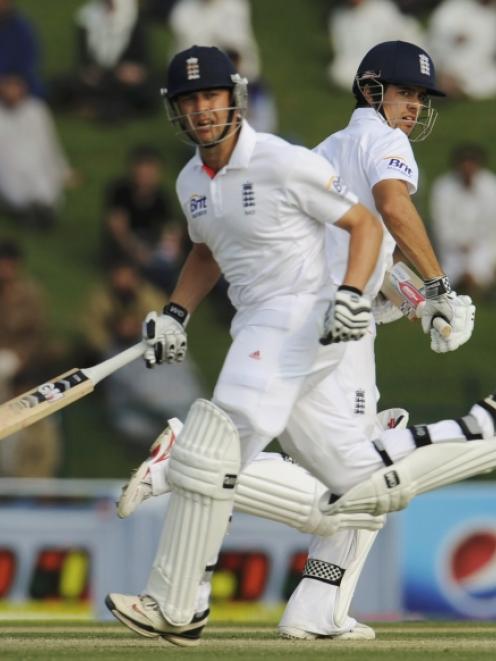 Ajmal, Pakistan's match-winner in the first match of the three-test series, reduced England to 207 for five after his side had collapsed to 257 all out in their first innings.

After taking the final three Pakistan wickets for only one run, England took control with a second-wicket partnership of 139 between Alastair Cook (94) and Jonathan Trott (74). Ajmal then checked their progress in the final session.

"We set our stall out to bat for a long period of time and for 99 percent of the day we did it really well; obviously the last 20 minutes didn't quite go to plan, but it was still a good day for England," said Cook.

Cook said he was unsure what lead England would need to achieve in the first innings as they face the unenviable task of batting last.

"This ground has been really high scoring, but the wicket we're playing on now is not a 600 wicket so it's obviously been prepared slightly differently," he added.

"Today it played better than it did yesterday. The wicket dried out a little bit more, I'm just not sure whether it will turn more as the game goes on."

Cook's knock steadied England after captain Andrew Strauss, who has reached 50 only once in his last 13 innings, had fallen to off-spinner Mohammad Hafeez for 11, pushing a thick inside edge on to his pad that looped up for Asad Shafiq to take an easy catch at short-leg.

Trott should have departed for 22, but escaped when Pakistan failed to ask for a review that would have confirmed he was lbw.

Pakistan, who play their home matches in the Gulf due to security problems in the country, finally dispatched Trott when the England right-hander was deceived by a delivery from left-arm spinner Abdur Rehman that spun past his outside edge and clipped the off stump.

Cook seemed poised to join compatriots Graham Gooch and Ken Barrington by completing his 20th test century but he was trapped lbw on 94 by Ajmal after 25 wicketless overs.

Ajmal then struck again as Kevin Pietersen once more struggled against spin.

He was soon out for 14 after clipping an inside edge on to his pad that looped up to Hafeez at slip. Eoin Morgan (3) followed, nicking a thin edge to Hafeez.

The sparse crowd had grown as the day wore on, Pakistan fans in their traditional shalwar kameez white trousers and knee-length shirt lolling on the grass banks that divide Sheikh Zayed stadium's two stands.

Most were low-paid security guards, labourers or drivers enjoying free entry and a special day off outside their usual 70-hour working week and they saw England start brightly as Pakistan resumed on 256 for seven, with captain Misbah-ul-Haq unbeaten on 83.

Stuart Broad and James Anderson ripped into the Pakistan tail and claimed the last three wickets in seven balls. Misbah added only a single to his overnight score before falling lbw for 84 to Broad, the all-rounder's fourth scalp of the innings.

Anderson then dismissed Ajmal for no score with a full delivery which angled towards middle and leg stump and trapped the batsmen lbw.

Three balls later, England claimed their first catch of the innings to wrap up the Pakistan tail, Junaid Khan edging a short ball from Anderson to Graeme Swann at second slip. 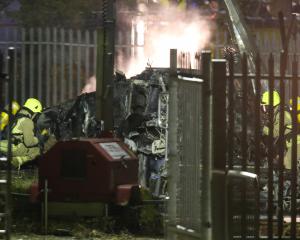